Women Bishops Are So Passe

As a former Episcopalian with great affection for Anglicanism, I’m taking a little break from our regular Tuesday and Thursday series on holy space with photojournalist Katie Archibald-Woodward to get on my soap box and give thanks for yesterday’s overwhelming support shown yesterday by the Church of England’s General Synod in favor of the ordination of women bishops. It was far too long in coming, but here a version of Neil Armstrong’s legendary exclamation on the moon may be apropos: “That’s one small step for the church, one giant leap forward for humankind.” A church that learns to take her women’s contributions and leadership as seriously as the man’s next to her will be a church that is better equipped to serve her world, and for that I’m very grateful.

A friend the other day remarked that a female Episcopal priest who habitually wears her dog collar out and about our neighborhood prefers that she be called “Father.” I was amused and a bit saddened. Since when, after all, should women have to become men in order to serve in leadership? Why, in the church at least, must women called to ministry and leadership often feel compelled to erase or even deny their gender? A sad phenomenon. Maybe yesterday’s vote is one more sign that some day, maybe when my daughter is a grown woman, women in the priesthood won’t have to feel uncomfortable being called “Mother.”

On another note, I’m updating my speaking and book tour schedule for next year. If you and your church would like a guest visit, let me know! 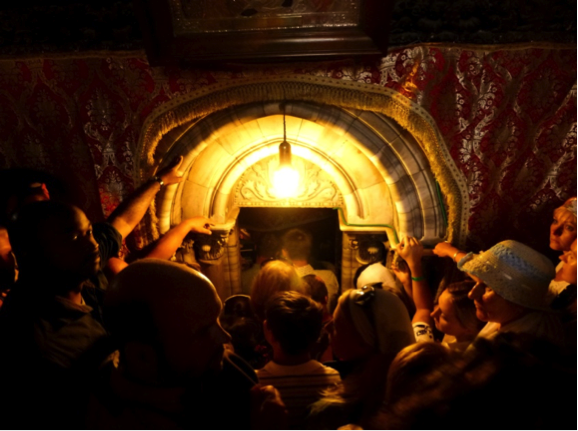 Holy Space 7: At the Site of Your Birth
archives most recent
More from Beliefnet and our partners
previous posts

The Loneliness Epidemic – and Faith-Filled Tools for Coping

Friend and author Amy Simpson, whose forthcoming book Blessed Are the Unsatisfied hits book shelves in February 2018, is also a coach and thought leader on issues related to mental health. Amy recently invited me to share some reflections in a guest post for her blog. Explore these “3 Tips for Coping With Today’s Biggest […]

Trump in Jesus' Name – The Tragedy for Christian Witness

This past week an overwhelming majority of America’s Christians went to the polls to vote in a candidate whose campaign targeted women, Muslims, minorities and people with disabilities as scapegoats, and whose televised rallies brimmed with hate language and bullying antics that until now my children had thought were not allowed on the playground (but […]

The Ecology of Rest

This evening a whole gaggle of Canadian geese were crossing the last 200 yards of narrow road leading to the monastery retreat house. As usual I’d been in a hurry and was running late to catch dinner and a room key… The geese stopped me. Like mini orange flippers shuffling off to the local pool […]

"The Will to Matter"

On the heels of last week’s heartbreaking events nationwide — in Baton Rouge, Minneapolis and Dallas —I’ve been reading philosopher and novelist Rebecca Newberger Goldstein’s book, Plato at the Googleplex: Why Plato Won’t Go Away. The question that preoccupied the ancient Greeks, Goldstein observes, is one that preoccupies us today, too — and maybe most […]