Archaeology among us. A wonderful idea for a book. 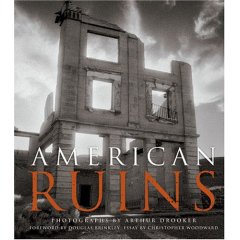 Southern New Mexico is the site of some of America’s most spectacular ruins.
Photographer Arthur Drooker traveled America for two years taking pictures of places like the Quarai Mission, which was built in 1622 as Spain expanded its empire.

“Well just think of it,” he told CBS News correspondent Jerry Bowen. “If we were here about 350 or 400 years ago on a Sunday, there would be a mass going. We’d be walking through these walls, which probably would have been plastered white. There’d be gold ornamentation. Crucifixes. The Indians who were converted would be probably on their knees praying to their new god. So all that goes through your mind as you’re walking here.”
Quarai and the nearby Abo Mission are among two dozen man-made structures that have weathered time and now fill the pages of Drooker’s new book, “American Ruins” – from missions to ante bellum mansions to Alcatraz, the prison that was home to Al Capone and Machine-Gun Kelly.
“I like to think that my book is almost a guidebook, if you will, to some of these places,” Drooker said. “Because most Americans just don’t know about them and they should be visited. I think it’ll give people a certain kind of depth and appreciation for our history and heritage.”
To make Drooker’s list, the ruins had to meet certain criteria: They had to be part of a preservation program, and had to represent the geographic and architectural diversity of America.