Harry Potter and the Sabbath Hallows

In the spring of 2005, when my wife was around eight months pregnant with identical twin girls, we took the mandatory tour of the hospital on the Upper East Side of Manhattan where she was going to deliver (naturally!) our girlies. The group was surprisingly diverse and included an ultra-Orthodox Jewish couple — black hat, beard, modestly dressed woman, the whole thing. Near the end, the man asked a series of agitated questions about what would happen if his wife went into labor on Shabbat. How would we get to the hospital? How would he sign the registration papers? And one that nearly made me lose control: How could he pay for the delivery since he wouldn’t be allowed to carry his insurance card? Now, I’m Jewish, but don’t particularly keep Shabbat. I don’t keep Kosher. But what irritated me to no end about this line of questions was that it represented, to me, everything wrong with the legalistic side of religion. First, the woman was very kind, and clear, that he could come in any time and fill out the paperwork and give his insurance card so he didn’t have to violate any religious mandates. But still: Here he was worried about violating some minor law that was clearly not even imagined at the time the Bible was written or Judaism was invented and he was overlooking the first commandment God gives to humans in the Bible (the first thing he says to them at all): Be fruitful and multiply. Get your priorities straight!

I remembered this long-forgotten incident this weekend, when I read that rabbis in Jerusalem had complained that Harry Potter was going on sale on Shabbat. 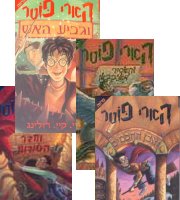 With Israelis already clamoring for Deathly Hallows, many bookstores are planning to launch the book on time anyway. That has drawn fire from Orthodox Jewish lawmakers, including Industry and Trade Minister Eli Yishai, who threatened to fine any store that opens Saturday.
“Israeli law forbids businesses to force their employees to work on the Sabbath, and that applies in this case as well. The minister will fine and prosecute any businesses which violate the law,” said Roei Lachmanovich, a spokesman for Yishai, of the ultra-0rthodox Jewish Shas party.
Avraham Ravitz of the United Torah Judaism Party slammed the Potter books for their “defective messages.”
“We don’t have to be dragged like monkeys after the world with this subculture, and certainly not while violating our holy Sabbath,” Ravitz said in a statement.

Dragged like monkeys? So now Harry Potter is not only a threat religion, he’s a threat to evolution as well? But I thought strict Judaism denies evolution? I dare say Judaism, in roughly its 2500th year, having survived Christianity, Islam, the Holocaust, its own infighting, and inane caretakers like these ministers, can survive the Hogwarts School of Witchcraft.

read next post
Feiler Faster 2.0
archives most recent
More from Beliefnet and our partners
previous posts