I have made a lot of posts on this blog over the years about transparency, and the importance of integrity and admitting when you are wrong. I need to model that this morning, because I accidently discovered that Ahmed’s clock is manufactured.

My interest was less in timepieces and more in robots. BattleBots were in their heyday back then. I would take all the plastic off an RC Car and then zip tie it back together with a slightly modified (inferior) configuration and call the new creation “My Robot” which I brought to school for science fair. I didn’t realize at the time that doesn’t really count as inventing a robot.

I’m white, and I was never arrested, suspended, or discouraged from any of this in 2001. 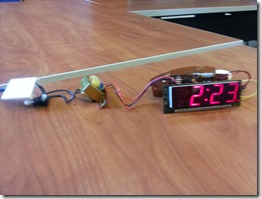 Fast forward 15 years I am now less interested in electronica and more interested in making the world a better place. I am in my last year of seminary and heard a story about a nerdy kid I related to being arrested for bringing the circuits he tinkers with to school to tell his teacher. It got under my skin. Posted about the homemade clock on social media #IStandWithAhmed And I took it a step further. I brought a clock to school.

At the time no picture had been released, but a description from the police seemed to indicate that the circuits were exposed, so I took a page out of my High School Handbook and cannibalized the alarm clock in my room to make something I thought would approximate Ahmed’s clock.  (That’s My Clock Above)

The point was to demonstrate that since I am white, Nothing would happen. Nothing did 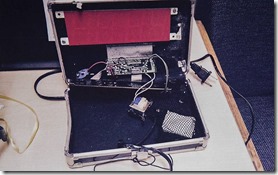 Both of our clocks feature two circuit boards, one connected to the LCD, and one with buttons. Both feature transformers and 9 volt battery sockets which prevent you from having to reset your clock if it is accidently unplugged. Both have mounts fro screws.

None of this stuff would be built into a homemade creation. This is the result of taking an existing clock apart and presenting it as a clock you built. but I must reiterate this is exactly what I did when I was his age!

I didn’t get arrested, which means I didn’t get invited to the white house or silicon valley. Which means I was not put in a position to be exposed as a fraud in the national media for something I did totally innocently, as a naive freshmen, but now surely Ahmed is going to have to answer for why the clock he “made” is a fake, when in reality it’s actually nothing more or less than what nerdy kids do.

This doesn’t change the story very much. There is still a massive problem with racism highlighted by the fact that this would never happen with a white kid, I’m proof of that. There is still a massive problem with school zero tolerance policy highlighted, perhaps even more so now that we know this is literally a clock you could buy in a store without the plastic on it. It does seem to mean that Ahmed is not the kind of genius his invitations seem to expect, and that’s tragic.

If Ahmad was a tech genius who built his own circuit boards by hand at 14 then his arrest would be unfair but ultimately societies positive response would allow him to write his own ticket to a great future. If he’s just a bright kid like me playing around both the arrest and the response will amount to stress and embarrassment he does not need. I really wish it could have been a non-issue for him.

Still I wanted to be transparent about my discovery that the “Homemade Clock” I defended was different from what I represented it to be publicly. I’m sorry too.