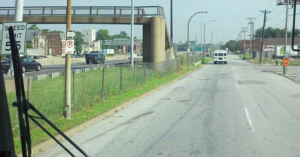 About halfway to Columbia Missouri I used the restroom. I’ve used restrooms on buses before. Back in California I was a part of a very large youth group and there was no way we were going to get enough 15 passenger vans to move everybody, so we used to charter buses to our camping trips. The bathrooms on those buses were much like those on airplanes. Smelling heavily of blue disinfectant fluid with a bowl tapering to an automatic metal flap. That was not the experience here. Instead this bus had something more like a PortaJohn or a campsite bathroom. Just a seat leading straight down to a box filled with human waste. I was glad to be seated near the front.

I lost track of Leo, and ended up sitting next to a older gentleman with a voice like Henry Fonda, or Sam Eliot. Deep and world wearied. He was an ex-trucker who now delivers cars for people. So if you buy a car on eBay for instance and it’s in Rhode Island, this guy will drive it to you and then take the greyhound back home for a small fee.

We talked for a long time, all the way to St. Louis. Or rather he talked, I listened. He was a Christian and went on at some length about how he came to faith, and what he did now with it. He was deeply concerned with Christian political issues like gay marriage, not so much with personal righteousness. It was clear in his mind that a lot of people were wrong, Catholics, Muslims, and Christians who were just looking for fire insurance were all equally subject to judgment in his mind. He didn’t really ask me what I thought.

I was glad to have the background noise though, as it gave me something to do and think about. The alternative was to think about the bus I was in which stalled 7 times on the way to St. Louis as it weaved through the various small towns in the Ozarks. I didn’t much want to spend the day in one of these towns waiting for Greyhound to send another bus. Luck was with me, and I got to sit listening to Mr. Fonda’s soothing voice the whole way. 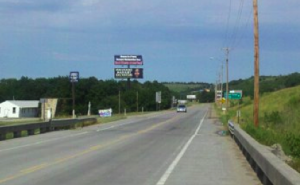 Bus: Leg 2
archives most recent
More from Beliefnet and our partners
previous posts