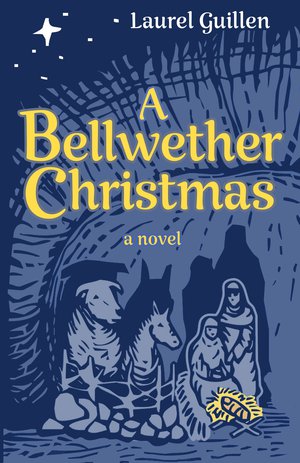 A new Christmas classic? Could be. Laurel Guillen‘s debut novel A Bellwether Christmas puts a fanciful spin on the true story of how St. Francis of Assisi came to create the iconic Christmas crèche that has become such a part of our holiday celebration today. Guillen, the wife of former ABC News science editor – and current Science + God podcaster – Michael Guillen, is a former journalist and movie producer who tells me how found herself drawn to telling the essentially true story of the crèche in an imaginative way that engages children as well as adults.  ‘

JWK: So, tell me about A Bellwether Christmas. What’s it about and how did the story come to you?

Laurel Guillen: How it came to me is interesting. It was a few Christmases ago. It was the Christmas season and it just kind of downloaded into my brain, the whole plot in about five minutes. I ran home and wrote it down and then I looked at it and I was like “Oh! I love this but this is not an adult novel. This is more aimed at kids and families. This is gonna be a kids’ novel” and I was like “Wow!” I never expected that my first book would be a kids’ novel.

JWK: Do you have children?

LG: Yes, I do. My son is in college now. He’s going to CSU. But the interesting thing about the (book idea) is that it brought together two of the things that I knew and loved the most. (One is) the Franciscans of the early 13th century. That’s just a subject I’ve loved ever since I took my grandmother to Italy back in the nineties. I spent hundreds and hundreds of hours reading about that time period and about the people involved. So, it was kind of something I really loved. I just fell in love with Francis on that trip and…then it also brought together my love of animals and my knowledge of farm animals, particularly, because my son growing up had kind of collected them all – starting with a horse and then two sheep from 4H and then he adopted a wild donkey and her baby. So, this idea for the story kind of just brought those two things together so it ended up being a lot of fun to write it.

JWK: And this is your first novel.

LG: Yes, it it is. As I said, when I took that trip to Italy, I came back certain that God wanted me to write something about that time period but I tried a few things and they just didn’t come about. That’s why I was doing all that research. I was like “Well, there’s a book here that I want to write.” Then, you know, it just never came about. I got busy with so many other things but then when this (idea) hit (me) it was great because I already had all that knowledge in place.

JWK: So, why do you think this story will resonate and is important to tell?

LG: I think it’s important on a few levels. On one level it’s really, I think, (about) stuff that the people have lost track of – or don’t even know. It’s almost like a forgotten story. You know, the idea that we have these Christmas nativities and these crèches and we go to services at midnight on Christmas Eve. That’s just something we just figured “Well, we’ve just always been doing that” – but, actually, no. That started almost exactly 800 years ago – in fact, next year it will be 800 years – in a little town in Italy and it was Francis’ idea. So, that’s the first thing – that here’s a tradition that we do really understand to have just always existed but it’s something that has a definite beginning. He brought it about because, even in his time, people were so focused on the eating, feasting, playing games and giving gifts. He wanted them to kind of focus a little more on this whole miracle. Also, it kind of fit into his love of poor people and love of God and, you know, just focusing people more on what kind of sacrifice God actually made to have His Son born in a manger. So, that’s one of the things.

Also, I did the story from the point of view a kind of headstrong, very impetuous lamb named Bart. He shares a lot of characteristics with his namesake. We had a sheep named St. Bart and he has, basically, his personality…He has the age of a child who would be, say, ten, eleven or twelve – but he’s just very headstrong, very impetuous. He’s different from the rest of his flock. He’s really struggling with belonging and understanding some concepts like…love and things like that. People who have read it have said “You know, this is really good for my kids” to see how someone begins to understand that and what it means to belong and what love and longing really mean. So, that’s another aspect of it I actually think is really good.

There is also an underlying theme about just kind of Christian stewardship of the animal kingdom and of the whole environment because Francis just had an incredible affinity with animals (and) with nature.

JWK: Do you live on a farm?

LG: We have a small ranch in Texas.

LG: Yes – and always have. It was something my son just kind of emulated. He’s even better with animals than I am. In fact, he’s now at CSU (studying) animal science, doing equine studies. He’s very serious about animals.

(Getting back to) Francis, (he) had a real affinity with animals. There are so many great stories and things that were told. Some of them are legends, some of them are kind of documented – about ways he communicated with animals and they communicated with him. So, that fits perfectly into my story. I even use some of the some of the legends (about) some of the animals he (was said) to have spoken to or preached to in (my) story…So, that kind of gives you a little feel for how unusual a fellow he was…I think kids will also get a lot out of that. If they love animals, they will really enjoy this book and they’ll really understand a little bit more about the Middle Ages.

JWK: Would you like to see your film adapted into a film?

JWK: What is it about the Franciscans that fascinates you? You’re not Catholic, are you?

LG: I was born and reared Catholic…When I was about 15 my parents got divorced and that just kind of all went away. So, I (was) a lapsed Catholic. Then I really discovered God again and was saved by reading The Bible through with my future husband – who had also never read The Bible through and was probably even less interested in it than I was but, together, we kind of came to our own faith after that. So, I would call myself a kind of nondenominational Christian at this point.

JWK: So, what is it about the Franciscans that fascinates you so much?

LG: Francis’ personality – because he was larger than life, as they say. He was just brilliant as a preacher and just had such a flair for the dramatic and just was so earnest and just a marvelous character – and also the fact that he was basically an agent of reform. At the time the Franciscans and the Dominicans really propped up the Church at that point because so much of the Church was involved in power and wealth. There was corruption and there was paying for indulgences – and here he was emphasizing the life of the early Church, of the itinerant (preacher when) the Apostles would go around with nothing. He and his brothers would travel around. They owned nothing except the robes on their back and they tended to the poor. They were all about peace, not war, when the Medieval Age was all about war. So, I just thought they were such a breath of fresh air – and just his kind of Italian passion too just really attracted me. I just thought he was just a great character, plus his love of animals.

JWK: I’m an animal person myself, so I get that. So, how do you feel about Pope Francis?

LG: I haven’t really followed him that much but one thing I do give him credit for is taking the name of Francis and moving out of the fancy papal apartment into something more simple when he first assumed the papacy. I thought that was a really great move because it really made that signal that, even though he wasn’t Franciscan himself, he was trying emulate that (love of the poor). He’s getting away from the (connections to) wealth….and reminding people that it’s the humble and the poor that are important and they need to be taken care of. It’s not all about wealth and power.

John W. Kennedy is a writer, producer and media development consultant specializing in television and movie projects that uphold positive timeless values, including trust in God.

Here’s the latest from the crossroads of faith, media & culture: 02/01/23 Following a successful opening week Fathom Events has extended the theatrical run of Left Behind: Rise of the Antichrist. The biblically-themed suspense film will remain in select theaters nationwide through next Wednesday (02/08) at select locations. The movie opened in theaters nationwide on […]

Here’s the latest from the crossroads of faith, media & culture: 01/30/23 Exploring some Big ideas on the morality of capitalism with Brian Brenberg. The Executive Vice President and Associate Professor of Business at the NYC-based Christian liberal arts school The King’s College joined Fox News as a contributor offering financial commentary in 2020. Since […]

On Holocaust Remembrance Day "How Could This Happen" author Dan McMillan ponders could it happen again?

Here’s the latest from the crossroads of faith, media & culture: 01/27/23   Never again? Today we remember those that suffered during the Holocaust, but also pledge to continue fighting for justice for present-day victims of genocide, including Uyghurs and other Turkic peoples of East Turkistan – Prime Minister Salih Hudayar of the East Turkistan […]

Kevin Sorbo on why his new movie "Left Behind: Rise of the Antichrist" may be ripped from the future's headlines

Here’s the latest from the crossroads of faith, media & culture: 01/25/23 A cautionary tale for our time? Whether you’re into antichrist and end time speculations or not, a viewing of the trailer for Left Behind: Rise of the Antichrist suggests a pretty powerful allegory about the disconcerting era we’re living through right now – […]