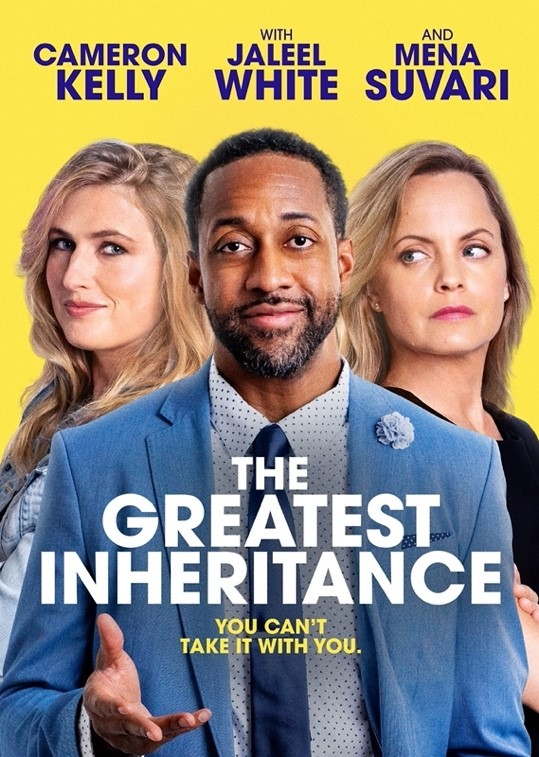 Beyond Urkel. Best known for his childhood role as Steve Urkel in the classic nineties TGIG sitcom Family Matters, Jaleel White, IMHO, remains a gifted and underrated comic actor. This week you can catch him putting that talent to use when the faith-themed comedy The Greatest Inheritance debuts on digital and VOD on Friday (3/25).
Co-starring Mena Suvari (American Pie) the movie follows four estranged siblings as they embark on the scavenger hunt to find  of a lifetime their mother’s will which is hidden somewhere on her property. The person who finds the will inherits the estate. Through many twists and turns, plus their mom’s unexpected “special rules,” they are reminded of the hope that guided their mother’s life – and what their greatest inheritance really is. White plays Mr. Shepard, the catalyst for their quest.

Writer/producer Alexandra Boylan says “The Greatest Inheritance is a film that everyone needs to see…It is so important to be reminded of the final – just to not use great and greatest SO much – inheritance we will all receive in the Kingdom of Heaven. It puts everything else we experience on a daily basis into perspective.”

You can watch the trailer here.
___
More Deadly Sins. On the heels of last year’s popular Lust and Envy movies which were seen by over 9.4 million viewers in their airings, Lifetime has set the premiere dates for its next two Seven Deadly Sins  movies. Like the first two films, Wrath and Greed are executive produced Bishop T.D. Jakes, along with Derrick Williams and Shaun Robinson and based on the series of books by Victoria Christopher Murray. Synopses follow the official promos below.

Wrath: A Seven Deadly Sins Story (airing Saturday, April 16 @ 8:00 PM ET) tells the story of single lawyer Chastity Jeffries (Michelle Williams) who meets Xavier Collins (Antonio Cupo), a man who seems to be everything she is looking for in a partner—handsome, smart and a lawyer as well.  As his affection turns to obsession, Chastity realizes that she has been swept up by Xavier’s passion and abandoned her principles. When Xavier’s jealousy and wrath lead to suspicious actions and dangerous threats, Chastity confides in her mother Sarah (Tina Knowles-Lawson) and turns to her former childhood boyfriend Roger Thompkins (Romeo Miller). But, in the end, Chastity will have to fight to save herself.

Greed: A Seven Deadly Sins Story (airing Saturday, April 23 @ 8:00 PM ET) is about Zuri Maxwell (Monique Coleman), an interior decorator who has it all – a career she adores, a loving family and friends, and a good man in her life (Nathan Witte) – until greed threatens to destroy everything. (Don’t you hate when that happens?)
Encourage one another and build each other up – 1 Thessalonians 5:11
read next post
Actress/producer Jenn Gotzon ("The Farmer and the Belle") says beauty is in the Eye of the Creator
archives most recent
More from Beliefnet and our partners
previous posts

Here’s the latest from the crossroads of faith, media & culture: 06/24/22 I interrupt my blogging break (I’ll be back Monday, July 21) for this comment on today’s historic Supreme Court abortion decision. For what it’s worth, I think it’s the right decision. The question now is where do we go from here.  Below is […]

Here’s the latest from the crossroads of faith, media & culture: 06/10/22 Going Home currently streaming on Pure Flix. Created and executive produced by Dan Merchant, the drama series stars as Cynthia Geary (Northern Exposure) as Charley Copeland who leads the dedicated staff of the Sunset House hospice as they do their human best to […]

Kirk Cameron schools me on "The Homeschool Awakening"

Here’s the latest from the crossroads of faith, media & culture: 06/08/22 Kirk Cameron Presents: The Homeschool Awakening hits theaters for two nights only next Monday (6/13) and Tuesday (6/14) at 7:00 PM (ET). The latest Fathom Event has the former Growing Pains star-turned-film producer and TBN talk show host making the case for homeschooling […]

Here’s the latest from the crossroads of faith, media & culture: 06/06/22 Coming of Sage. In The Courage to Identify Who You Are, Indian-American author Sharon Angel shares the wisdom she’s learned growing up as a “third-culture kid” confronting group identity expectations and emerging to discover her true identity. JWK: Who did you write this […]