2022: The Year of Balance + PragerU Teaches kids about the values of Martin Luther King, Jr.

Welcome to my first post of the new year.

How’d we get here? A Trafalgar Group poll for the conservative group Convention of States Action (conducted December 17th through December 21st) finds that we begin 2022 with 80% of Americans likely to vote in the midterm elections believing the country is in a state of decline. Here are some of the key stats:

A Majority of American Voters Say Society and Culture are Declining:

A Majority of Democrats, Republicans and Independents all Agree American Society is in Decline:

Those numbers are hardly shocking when the institutional powers of Education (K through Higher Indoctrination), global corporations (most notably Big Tech/News and Entertainment Media) and, of course, politics and government all seem arrayed in a disturbingly coordinated way to promote systemic shame, anger, division, government dependency and despair among the American people while (surprise!) amassing increased power unto themselves. Mix in absurdly inconsistent standards regarding the “mostly peaceful protests” of 2020 and the “insurrection” of 2021 (when “riots” would fairly describe both), as well a sometimes dystopian stripping of words like  racism (a serious charge) and science (a serious discipline) of any real meaning to shutdown legitimate debate and it’s no wonder that honest and intelligent people seeking balance are tuning out the political and corporate powers that be.

Speaking of balance, let’s declare restoring it as the theme of this new year. When it comes to the News and Entertainment Media, the focus of this blog and my personal passion, that means providing content that is inclusive of people of diverse lifestyles, backgrounds, faiths and political perspectives. It means its time to stop inflaming divisions by constantly ripping off the scabs of old wounds and fanning fears over the future. The way to get past the past is learn its lessons while gracefully letting it go. The way to face to face the future is by overcoming media-fed paralyzing worry with faith, hope, compassion and wholesome discipline. As one nation under God, we need less America shaming and more gratitude for the blessings bestowed upon us by our imperfect but heroic forebears.  If, for whatever reason,  the corporate media continues to offer us a diet of division and discouragement over mutual respect and encouragement, let 2022 be the year we unplug and create something new.
____ 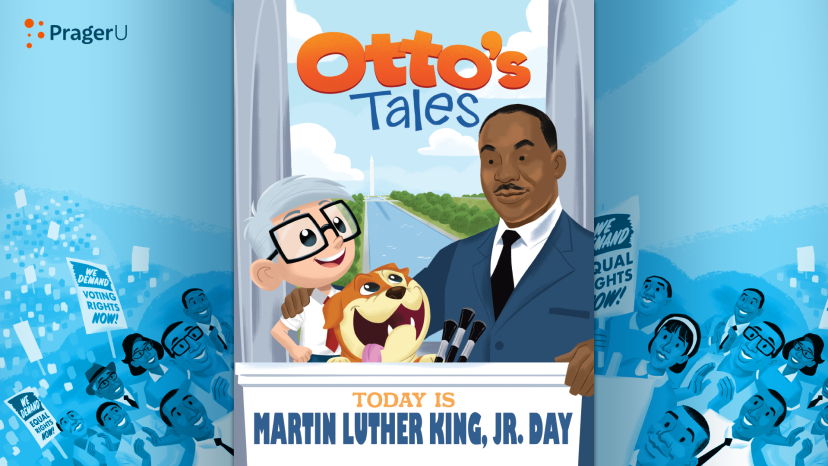 Connecting MLK to a new generation. Just in time for  January 17th, the latest edition of PragerU Kids‘ bestselling child-friendly book series Otto’s Tales (about a time-traveling boy and his eponymous dog) is titled Today Is Martin Luther King, Jr. Day.  As the title suggests, the new edition has the pair learning about MLK’s dream for a color-blind society and a world that recognizes that everyone is created equally in God’s image. The book is the seventh installment of Otto’s Tales. The illustrated kidlit series is aimed at teaching  children ages 3 to 8 about traditional American values.

PragerU Kids Director of Outreach Jill Simonian (and friend of this blog) says “In a time when so many of our schools insist that students identify themselves via their differences first, PragerU is proud to honor Dr. King’s quest for a colorblind America…His example inspires all of us to educate our children about our shared American identity, history, traditions, and values.”

You can see and hear  social media sensation and dad Kory Yeshua narrating the story here. In 2021, Yeshua posted a viral video with his daughter in which the pair rejected Critical Race Theory. Some teachers should check it out too.

Encourage one another and build each other up – 1 Thessalonians 5:11
read next post
Megan Alexander says there's just something about a "Small Town Christmas"
archives most recent
More from Beliefnet and our partners
previous posts

As "This is Us" departs, a look back at my five favorite TV series finales

Here’s the latest from the crossroads of faith, media & culture: 05/23/22 https://www.youtube.com/watch?v=urssihg0PjE NBC’s This is Us wraps with its much-anticipated season finale tomorrow night (5/24). While, for whatever reason, I never watched the show enough to get into to it, it certainly garnered a large and loyal fan base during its six-season run. While […]

Here’s the latest from the crossroads of faith, media & culture: 05/16/22 https://www.youtube.com/watch?v=dDd0odUejB0 In Jesus and Women: Beyond Feminism, theologian and mother of two Niamh M. Middleton says understanding Jesus’ teachings on sexual equality lights the way forward for society today while greatly enrich our understanding of His divinity. JWK: You are a theologian and […]