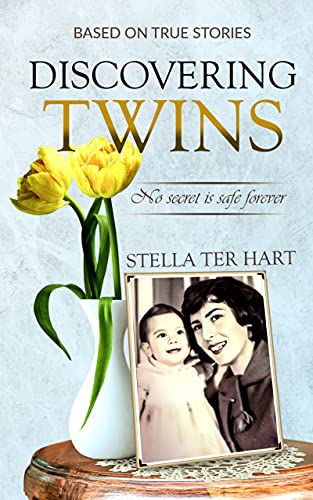 Unforgotten. Stella ter Hart found success as well-known composer and musical accompanist. Now semi-retired and (with her husband) the owner of a large and flourishing apple orchard, she is literally enjoying the fruits of her labor.

She has also found time to write Discovering Twins, a book that goes beyond a mere memoir into the territory of historical fiction such as was employed by Alex Haley with his groundbreaking Roots African-American family tree saga in 1976. Historical fiction is a story that is based on true events but fills in the sometimes unknowable details with some dramatic license. When done well, it can actually provide the reader a greater sense of the reality the people who lived through the actual events experienced.

As for her own family history, ter Hart is a direct descendant of the Italian composer Tomaso Vitali and has many other musical family members and ancestors. Her European ancestry includes French Huguenots on her father’s side who fled the Netherlands in the 15th century to avoid persecution and, more recently, the loss of her maternal grandmother’s entire Jewish family (over 1,200 family members) in World War II concentration camps. Among those victims were her 79-year-old great grandfather and a seven-year-old girl also named Stella.

Discovering Twins is the result of conversations the author had with her mother before her death – conversations that provided glimpses into a family history that she says is far darker than she ever imagined: “My mother carried secrets and covered them with lies. She didn’t want to—they were forced upon her. Little by little her secrets gradually unraveled and became part of my existence. My mother was terrified her secrets would be discovered, and this terror dominated her life. My first glimpse came in 1978 when I traveled with my mother to Holland, the country of her birth and my ancestors. I was introduced to relatives I never knew existed—on both sides of the family.  Picking up on clues, I realized that my mother’s background was Jewish, Dutch Jewish, Holocaust Jewish.  She was unable to speak of it and I was forbidden to bring it up. After my mother died, I felt a freedom and obligation to discover more. What I uncovered was staggering and shocking.”

JWK: You write that your mother was forced to carry secrets that were forced upon her throughout her life. What were those secrets and how did keeping them affect her life?

Stella ter Hart: As a young girl during World War II, my mother was either entrusted with, or overheard, many secretive pieces of information, such as where family members were hiding, where other Jewish friends of her parents were hiding, where valuables were hidden when family and friends were deported, which non-Jewish friends and family were in the Dutch Resistance (including her oldest brother, Tony) and, most likely, many more dangerous pieces of information.

After the war, the habit of keeping this level of secrecy caused my mother to become very personally secretive about so much of her life. Her biggest secret, I believe, was that she never told any of her friends about her Jewish past and what happened to her family. I believe she was truly petrified of not only their reaction (possible loss of friendship, racist feelings) but also that she believed that it could all happen again, or that some person in power, if they knew what she knew, would extract information from her.  And she had such difficulty telling the truth, even about ordinary, everyday things.

JWK: What led her to reveal these secrets to you?

StH: During our trip to Holland, my mother had no choice but to admit that she had Jewish relatives, as discussed in the various chapters about our trip together in 1978. I met them, figured it out, and asked questions. The various secrets only came out one by one as the years went by.

JWK: How did you go about researching the stories your mother told you?

StH: After my mother died, quite by coincidence, I began delving deep into our family genealogy, originally on my father’s side. I tripped over my mother’s family, and the more I dug, the more I discovered.  My mother only told me the barest of facts. The remainder I filled in by asking other family still alive, meeting one of my 2nd cousins (whom I did not know existed), and tons of research into Dutch Jewish and non-Jewish life from before and during the war years.

JWK: What more did you learn?

StH: I learned so much more about Nazi treatment of Dutch Jews than I had ever learned before!  What we are taught, or rather, not taught, in school didn’t even come close. Most adults have been exposed to the broad generalities of the Holocaust. My book draws in and focuses on the lesser known details (such as) how people’s lives were disrupted and choked out over time, what the roundups (known as “razzias”) were like, the disbelief of what was happening in Holland when it was occupied by Germany, clues of what could happen to Jewish society based on what had happened in German society, and so much more. I write about all these details in my book and weave them into the stories.

JWK: How has learning of these stories affected your own life?

StH: Knowing the stories of my family, and what they lived through or, in most cases, did not live through, has made me grateful for every minute of every day. I am critically saddened that racism exists in society, the still ongoing abusive treatment of children and women, the power-mongering of governments…When will we learn the lessons of tolerance and acceptance? What will it take if even the Holocaust has not cured us of these evils? It is vitally important to continue to educate and make aware to every generation what happened to humanity in Europe between 1939 and 1945.

JWK: How has the rest of your family, including your children, reacted to your book?

StH: I have never kept our family’s Jewish background from my children, who are now all adults, so they were not surprised. Although my younger sister, who is also very sympathetic to our family background, was very positive about the book, I’m not sure my two older brothers approved of this family “reveal” in such a public manner; they have had little response. That’s a risk an author takes. No one can know how someone else may react to such a story.

JWK: Discovering Twins is described as part historical fiction, part non-fiction and part memoir. How so?

StH: There are a number of chapters where all I knew were the birth and death dates of relatives. I researched what life would have been like during their lives, and wrote historical fiction stories featuring them. Other chapters deal with actual, true events and those are written as non-fiction. Still other chapters are direct memories from my life, making those chapters memoir.

JWK: Where do you think the world is right now with regard to anti-Semitism?

StH: In general terms, people are naturally afraid of what they do not know and suspicious of anything different from themselves. Anti-Semitism or anti-anything, really, grows out of ignorance, suspicion and fear. Sometimes jealousy as well! I live in Canada and, thankfully, there is very little anti-Semitism here. Some parts of Canada, however, are experiencing a rise of anti-Muslim sentiment. I cannot understand racism and prejudice at all. People are just people; most good, some bad—everyone different in their own way.

My Uncle Louie, who escaped with his family from the Theresienstadt concentration camp, commented that although people arrived at the camp from every walk of life, every occupation and every financial status, when they were stripped naked and made to march in lines, all these former levels of society vanished. Everyone was equal—humans with no distinctions among them. You couldn’t tell who was a doctor and who was a pauper.

JWK: What do you hope people take from your book?

StH: This is such an important question and thank you for asking it. I hope that anyone reading this book has a greater understanding of ordinary Jewish life before Germany invaded Europe, of how much was suffered, how families were torn apart, how children and babies were brutally murdered. These are hard facts to know but, if we try to soften them or push them aside, the hard lessons cannot be learned.

I also hope that readers see the lights still on and that all is not dark. There is also humor in the book.  In a small way, the book represents bits of life as we all experience it. One editor I worked with felt that Discovering Twins should be required reading in every high school history curriculum.  Our brightest hope for changing the future lies in the education of our children.

Encourage one another and build each other up – 1 Thessalonians 5:11
read next post