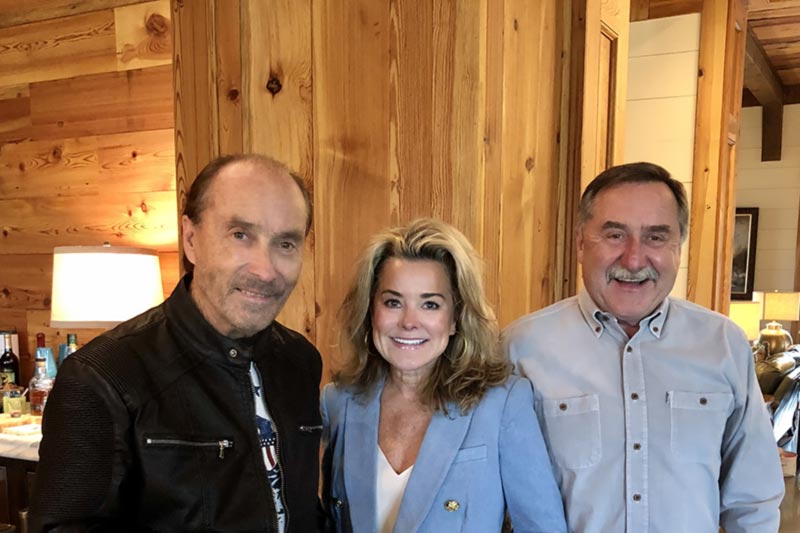 Through perennially popular concerts, legendary singer-songwriter Lee Greenwood is used to bringing down the house. Now the CMA, ACM Grammy Award-winning icon (whose trademark ode to America God Bless the U.S.A. has hit the top five on the country singles charts in 1991, 2001, and 2003 and is enjoying resurgent popularity this year) is helping promote the building of one. The music superstar has joined forces with Breland Homes to assist the Helping a Hero organization’s “Nominate a Hero” program in which the north Alabama community can nominate a wounded veteran for consideration to be selected as a custom-built home recipient. Nomination forms can be found at helpingahero.org.

The honoree will share the stage with Greenwood at the All-Star Salute to Lee Greenwood event at the Von Braun Center in Huntsville, Alabama on October 12th. Greenwood, who has served as an ambassador for Helping a Hero for over a decade, praises the organization, saying “The work they do is tremendous, especially when you get to hand those keys to a wounded veteran. The reactions are priceless…After I met Louis and Patti (Breland), I knew this was a wonderful opportunity to team together and make a difference. I am honored to share the stage on October 12th to honor a special veteran.” Breland Homes has been in business for 46 years and is considered one of the top home builders in the southeast.

Louis Breland adds “When Patti and I met Lee Greenwood and learned about his partnership with Helping a Hero to build homes for our veterans we jumped at the chance to help…Our nation’s military and the heroes that fought for our country have a special place in our hearts and we are always looking for opportunities to honor and support them. I can’t think of a better way to do this than to build a home for a wounded warrior in our community.”

“Helping a Hero is excited to partner with Breland Homes to build a specially adapted home for a wounded hero in Alabama,” says the organization’s founder Meredith Iler, adding “We are counting on Alabamians to help us locate a brave and deserving wounded veteran who was injured while serving the country and needs an adapted home. Our veterans have sacrificed so much for our freedom, and this is a way to say ‘thank you for your service.'”

Helping a Hero is a Texas-based 501(c)(3) non-profit, non-partisan organization that has awarded more than 100 homes in 23 states for wounded warriors injured in the Global War on Terror. Helping a Hero raises funds and works with building partners to design the homes so they are specially adapted to the hero’s needs. Most homes include wider doorways and hallways, roll-in showers, roll under sinks and other adaptations to help our military veterans regain their daily independence after suffering combat-related injuries. Helping a Hero is certified by the Better Business Bureau as a transparent and accountable charity and was also one of 12 charities selected by the BBB for the “Award of Distinction” in 2017. Applications are being accepted for 2021 and 2022 homes.
___

The family-friendly animated film Vivo drops on Netflix on August 6th. The film follows Vivo (voiced by Hamilton creator Lin-Manuel Miranda), a kinkajou who roams around Havana with his owner Andrés (voiced by Buena Vista Social Club’s Juan de Marcos González) singing tunes and playing music for the crowds. While they do not speak the same language, their bond is unbreakable due to their shared love of music. Adventure ensues when Vivo must deliver a hand-written letter to the long-lost love of Andrés, traveling from Havana to Miami and meeting a friend along the way. Despite current headlines regarding Cuba, the film is non-political family fare. It looks cute – and provides some long-overdue cinema representation for kinkajous. Check out the clip below.
Director: Kirk DeMicco/Writers: Kirk DeMicco, Quiara Alegría Hudes/Story By: Peter Barsocchini and Quiara Alegría Hudes/Producers: Lisa Stewart, p.g.a.; Michelle L.M. Wong, p.g.a.; Rich Moore/Original Songs By: Lin-Manuel Miranda/Executive Producers: Lin-Manuel Miranda, Laurence Mark, Louis Koo Tin Lok, Alex Lacamoire/Score By: Alex Lacamoire
Encourage one another and build each other up – 1 Thessalonians 5:11

Review: "The Starling" soars on Netflix + Director Theodore Melfi on his ode to marital commitment

Here’s the latest from the crossroads of faith, media & culture: 09/22/21 The Starling starring Melissa McCarthy, Chris O’Dowd and Kevin Kline lands (and soars) on Netflix this Friday. My review follows the synopsis and trailer below. After that, you can read my conversation with the film’s director (and co-producer) Theodore Melfi (St. Vincent, Hidden […]