Of Animals and Men chronicles WWII-era true story of “Noah’s Ark for people.”  The compelling documentary is slated to be released by Fathom Events in theaters nationwide for one night only this upcoming Tuesday (6/22). My review follows the synopsis and trailer below.

Synopsis: Every zoo aims to protect animal species from extinction. During WWII, Poland’s Warsaw Zoo went far beyond that noble calling. Once the war began, the Nazis killed some animals and transferred the others to the Third Reich. The abandoned enclosures were taken over by the species most endangered by warfare: human beings. Fugitive Jews escaped death and found shelter in the empty stables, kennels, and aviaries as well as in the house of then zoo director Jan Żabiński who also risked his life smuggling doomed Jews out of the ghetto. Żabiński and his wife Antonina hid them in their villa and in animal cages. Utilizing abundant archival footage, the film focuses on the extraordinary recollections of surviving witnesses, notably the couple’s daughter. The zoo offered a hiding place to about 300 people, sometimes for a day, sometimes for a few months. The exact number remains unknown.

IMHO: Coming in at a relatively short time of 1 Hr. 22 min. Of Animals and Men, nonetheless, tells a very big story that serves as an important reminder that true evil exists in this world. Making ample use of amazing black-and-white footage from the time period, the documentary tells the story of how, when history called, Jan and Antonina Żabiński (as well as their kids) stepped up when war and attempted genocide disrupted their previously idyllic lives. The resulting story is absolutely gripping and would serve as a good basis for a full-scale scripted feature. For now though, Polish-born director/writer Lukasz Czajka has delivered a timely reminder of the fragility of civilization, the true meaning of fascism (as opposed to today’s often frivolous dumbed-down Twitter definitions) and that, along with evil, love and heroism still exists in this world and, over the long haul, triumphs.

As the film draws to a close we are told that on 9/21/65 Jan and Antonina were honored as the Righteous Among Nations by Yad Veshem. Among the great lessons Jews have taught the world (whether or not we have learned it is another issue) is that true accountability comes by not painting everyone with one broad brush. By acknowledging that individuals cannot fairly or accurately be divided into amorphous blocs of oppressors and oppressed – and by giving due attention to the heroes who could have looked away but who, often at great risk, chose the righteous path against their perceived self-interest – we are actually holding the perpetrators of injustice and atrocities accountable for their individual choices. If we really want to be on the right side of history, we’d be wise to be wary of group think whether it’s done in the name of religion, science, politics or, yes, equity.

But, back my original point, Of Animals and Men is highly recommended.
___

In advance of her blockbuster big-screen turn as Aretha Franklin in RESPECT (due nationwide in theaters on August 13th), Oscar and Grammy winner Jennifer Hudson just dropped a video for Here I Am (Singing My Way Home). Co-written with four-time Grammy winner and Rock and Roll Hall of Fame and Songwriters Hall of Fame inductee Carole King and renowned songwriter Jamie Hartman, it will be included in the film’s soundtrack album (also due on August 13th). Here I Am will be the only original included in both the film and the album which, of course, will primarily rely on Franklin’s incredible array of classic tunes.

So, why a new song? Hudson says “Music is such a living and breathing character in this film, as it was in Ms. Franklin’s life. The process of creating this song was like constructing the greatest tribute I could possibly offer to her spirit. It was the final exhale of this extraordinary project and one that I let out with complete fulfillment. Being able to do so with Carole and Jamie was an incredible privilege. Carole is one of the greatest songwriters of all time and, whether we were trading stories, playing piano together over video conference, or working through lyrics, it was always a master class – both in life and music. Jamie and I have collaborated together in the past and it’s always so wonderful to create with him – he is continuously thinking outside of the box in a way that deepens the musical experience in indescribable ways. Our goal was to show that music was always the anchor for Ms. Franklin, in all that she did, and I hope this song illustrates the strength of her voice – both literally and figuratively – which always brought her home.”

About their collaboration King comments “Writing a song with Jamie Hartman and Jennifer Hudson felt both familiar and fresh at the same time. The process of songwriting continues to amaze me.  One minute there’s nothing, and then a song grows out of the seed of an idea.  The seed was dormant when Jennifer, Jamie, and I first met virtually. Jennifer and I had previously performed together and I was excited about writing with her for no less than a film called Respect in which Jennifer plays Aretha Franklin! I’m so pleased to have not just one but two songs as part of the soundtrack of RESPECT —the 21st century song “Here I Am (Singing My Way Home)” and my 20th century co-write with Gerry Goffin, (You Make Me Feel Like a) Natural Woman.”

Epic Records Chairwoman and CEO Sylvia Rhone adds “What Jennifer, Carole, and Jamie have created together is nothing short of historic. It celebrates the legacy of Aretha Franklin by channeling her spirit and style in an original, no less. As soon as I heard it, I was speechless. It has all the elements of a future American songbook staple.”

From MGM, RESPECT follows the rise of Aretha Franklin’s career from a child singing in her father’s church’s choir to her international superstardom. It looks great!
___

A newly paved Highway to Heaven coming to Lifetime. 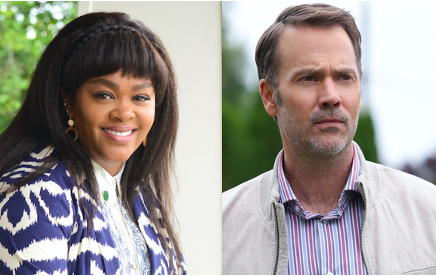 Photo of Jill Scott (by Dion Farrell) and Barry Watson (by Justine Yeung) on the set of Highway to Heaven.

A new take on the classic series (originally starring Michael Landon and Victor French) has been greenlit as a series of TV movies by Lifetime. The new version will by lead by Grammy winning singer/songwriter and actress Jill Scott (First Wives Club), who also executive produces, as the new angel Angela who comes down to Earth to help people in crisis. Barry Watson, perhaps best known for his role in the faith-themed family drama 7th Heaven, will co-star as Bruce, the junior high school principal to whom Angela reveals her true identity. The series is being produced in cooperation with Cindy Landon and the Michael Landon Estate.  Michael Landon, of course, created the highly-rated 80s drama that the new films are based on. The original show ran for over 100 episodes between 1984 and 1989.

“The original Highway to Heaven was appointment viewing for millions and in a time when we need those messages of hope the most,” notes Lifetime V.P. of Scripted Programming Tanya Lopez, adding “We are excited to bring back the iconic series in a new way.” About the pairing of Scott and Watson, she says “Having worked with Jill previously for some of Lifetime’s most celebrated movies, we know she is the perfect actor to bring her passion and brilliance to this role. I just love her…Jill amplifies everything she touches in ways that make her pop off the screen. And the addition of Barry was just icing on the cake. I believe we have assembled a dynamic new duo with both Jill and Barry at the helm.”

IMHO: Yes, a reboot of Highway to Heaven with a female lead sounds a bit like Touched by an Angel but, no matter, if it captures the themes of love, kindness, tolerance and forgiveness of either of those shows I’m on board. God knows we can use a little more emphasis on those qualities in today’s pop culture. I’m rooting for it. Meantime, here’s a clip that captures the tone and spirit of the original.

Encourage one another and build each other up – 1 Thessalonians 5:11
read next post
Should Brett Siddell have kids?+Film Preview: "A Father's Legacy"
archives most recent
More from Beliefnet and our partners
previous posts

Kevin Sorbo on why his new movie "Left Behind: Rise of the Antichrist" may be ripped from the future's headlines

Here’s the latest from the crossroads of faith, media & culture: 01/25/23 A cautionary tale for our time? Whether you’re into antichrist and end time speculations or not, a viewing of the trailer for Left Behind: Rise of the Antichrist suggests a pretty powerful allegory about the disconcerting era we’re living through right now – […]

Here’s the latest from the crossroads of faith, media & culture: 01/23/23 A Tale of Two Continents. A disturbing feature-length documentary called The Desire to Live (based on an ongoing YouTube series of the same title) is currently making the rounds on the festival circuit. The film chronicles alleged Russian-sanctioned atrocities against the mostly Armenian […]

Here’s the latest from the crossroads of faith, media & culture: 01/20/23 Phil Stevens of Missio Dei Films Man with a Mission. The faith-themed film The Send Off is currently in pre-production in Atlanta. It’s the first movie from Missio Dei (Mission of God) Films, the newly launched Georgia-based shingle created by Phil Stevens. After […]

Here’s the latest from the crossroads of faith, media & culture: 01/18/23 Trudy Cathy White says she’s an heir to her parents’ values. S. Truett Cathy, founder of Chick-fil-A (which, despite disdain from some in the activist class, for eight straight years has topped the American Customer Satisfaction Index as the nation’s #1 fast-food restaurant), […]