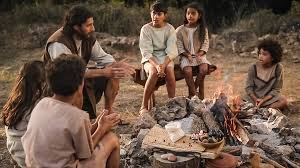 Fox Nation has picked up the first season of The Chosen. An international hit, the episodic/serialized retelling of the life of Christ (think Lost meets found) is part of Fox Nation’s curated selection of faith-based programming in honor of the upcoming Easter holiday. The streaming service’s programming leading up to the holy day will feature a mix of original and licensed content that celebrates the origins of Christianity. Along with The Chosen, the slate includes exclusive specials hosted by Fox & Friends co-host Ainsley Earhardt, Fox News’ chief religion correspondent Lauren Green, America’s Newsroom anchor Bill Hemmer and Fox News @ Night host Shannon Bream. Additionally, each day of March will debut a new edition of Pastor Robert J. Morgan‘s 100 Bible Verses That Made America examining notable points in history where prayer was a guiding force in moving our country forward. Details about the Fox Nation offerings are below.

On a far lighter cinematic note, the uplifting Ireland-set rom-com Finding You, appropriately enough, debuted its trailer this St. Patrick’s Day. The PG-rated film, set to hit theaters on May 14, follows the story of Finley (Rose Reid), an accomplished young American musician studying abroad in Ireland who meets Beckett (Jedidiah Goodacre), a heartthrob movie star shooting his latest medieval fantasy blockbuster. Naturally, sparks fly between the unlikely couple who inspire each other to find the strength to be true to themselves. But when forces surrounding Beckett’s stardom threaten to crush their dreams, Finley must decide what she is willing to risk for love. Based on the book “There You’ll Find Me” by Jenny B. Jones, the movie also features Katherine McNamara, Patrick Bergin, Saoirse-Monica Jackson, with Tom Everett Scott, and Vanessa Redgrave. I expect to have more on this film too as its release date nears. Meanwhile, check out its charming teaser.

read next post
Who decides what entertainment is good?+Why is Bill Maher a Democrat?+Jesse Watters nails the Totalitarian agenda
archives most recent
More from Beliefnet and our partners
previous posts