Unanimous Media, founded by three-time NBA champion and two-time MVP Stephen Curry and producer Erick Peyton, has tapped Brian Tetsuro Ivie as its Creative Producer for Film and Television. The American filmmaker and documentary director has built a reputation for taking on subjects of  religious and sociopolitical significance, including his 2019 documentary film Emanuel which tells the tragic story of the Charleston Church Shooting which took the lives of nine innocent African Americans in 2015.  His first documentary feature was 2015’s The Drop Box about South Korean pastor who rescues abandoned children.

Unanimous was created to produce television, film, digital and general content, with the stated goal of elevating diverse voices and shining a light on narratives that need to be heard. Ivie and Unanimous first hooked up in 2018 when Curry and Peyton saw an early cut of Emanuel and were impressed by the filmmaker’s ability to convey the horrific violence of the event while also capturing the inspirational and redemptive power of the victims to rise above unfathomable evil through forgiveness.

Regarding Ivie’s new role on the Unanimous team, Curry, whose faith has come to define not only his game but his entire career, says “We believe his shared passion and perspective will amplify Unanimous’ mission to inspire and educate.” He says he believes the company is well positioned to develop a more diverse, justice-minded, faith-empowered and influential brand of media and entertainment and influential worldwide ventures.

Of course, it’s none of my business, but they might want to consider taking on this week’s Overlooked Story of the Week: 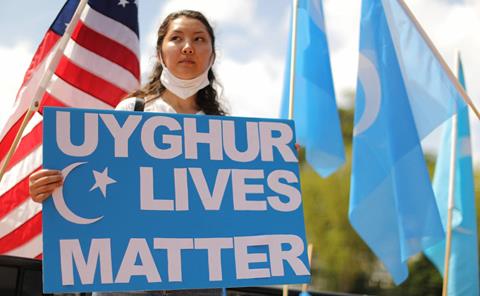 Where’s the movie or TV episode about what’s happening with the Uyghurs? Hollywood so fancies itself as a champion marginalized people that – as opposed to truly important films like Emanuel and The Drop Box – it sometimes seems to strain to create controversies and conflicts that either don’t or barely exist in the real world.  Yet on an issue of unicorn-like rarity – where even the former Trump Administration and the current Biden Administration actually appear to agree – we get the sound of crickets from the very film and TV creators who are usually eager to align themselves with what they consider to be the right side of history. Well, it’s a little hard to imagine that ignoring what looks like mounting evidence that China is committing genocide against its Muslim Uyghur population will look like the right side of history a generation from now.

The US has accused China of committing genocide against the Uighurs. According to international convention, genocide is the “intent to destroy, in whole or in part, a national, ethnical, racial or religious group”.

It follows reports that, as well as interning Uighurs in camps, China has been forcibly mass sterilising Uighur women to suppress the population and separating Uighur children from their families.

On his final day in office under the Trump administration, US Secretary of state Mike Pompeo said: “I believe this genocide is ongoing, and that we are witnessing the systematic attempt to destroy Uighurs by the Chinese party-state.”

A UN human rights committee in 2018 said it had credible reports the Chinese were holding up to a million people in “counter-extremism centres” in Xinjiang.

The Australian Strategic Policy Institute found evidence in 2020 of more than 380 of these “re-education camps” in Xinjiang, an increase of 40% on previous estimates.

“That would be my judgment as well,” (President Biden’s since-confirmed Secretary of State Antony) Blinken told the Senate Foreign Relations Committee when asked if he agrees with the State Department’s surprise genocide declaration. “Forcing men, women, and children into concentration camps, trying to in effect reeducate them to be adherents to the Chinese Communist Party – all of that speaks to an effort to commit genocide.”

The issue is why The East Turkistan Government in Exile and the East Turkistan National Awakening Movement are having a demonstration in Washington, D.C. today from 1:30 to 3:00 PM ET. The event (set to be streamed on Facebook) will be held in front of the Canadian Embassy to protest that country’s foot dragging on the issue. It’s likely to get all the coverage from the globalist corporate news media as the annual March for Life receives for its annual rallies – which is to say virtually none.  Why should we expect anything else? The entertainment giants and the news giants are, basically, one in the same and their globalist corporate interests lie in access to Chinese markets and capital – not in the truth or standing up for the lives of persecuted Muslims or, for that matter, unborn children.

Thankfully, the near news blackout hasn’t been total. Here’s an anchor doing a pretty good job of pressing the Uyghur on Canada’s CBC, followed by earlier reports by the BBC and PBS.

So, to be fair, there has been some serious journalism calling attention to the bleak human rights situation in China but there needs to be more.
IMHO: The media – including Hollywood’s talented storytellers – needs to look beyond their obvious financial interests and serve their higher calling.