Glad tidings. It’s been just about a month since I posted my conversation with Jenn Gotzon and Jim E. Chandler, the married stars and producers of the Christmas-themed romantic comedy The Farmer and the Belle.  Since then the independent film has become a sleeper hit of the holiday season. I recently had the opportunity to chat with the couple about the film’s success and the impact it is having.

JWK: So, tell me, how’s the movie been doing?

JENN GOTZON: We’ve been extraordinarily blessed. We’ve had some really successful responses from audiences who have seen the film. We really couldn’t be happier. It literally feels like God has given a kiss on this story that’s really making an impact on lives.

JG: We’ve actually received emails from people asking to purchase the bracelet because the movie has impacted their lives so much. Those emails have come from all across the globe – from Jamaica to Australia to Scotland to other countries. I can’t remember them all.

JG: (People from) several different countries have reached out (including) Holland, Switzerland, the U.K. (and) Canada. (The film) has been able to reach some wonderful people so far.

JWK: Why do you think the film’s core message about beauty coming from within is resonating so much with people?

JG: We’ve gotten some feedback on IMDB, Amazon reviews and Facebook. People are saying that this is their new favorite Christmas movie. Some have said that they have watched it multiple times. Young kids have been really responding well to the movie…One of the stories that we heard is that this grandma watched it with her granddaughter – I’m gonna cry because this was my hope – and after the movie (she) said “Grammy, am I beautiful? Am I pretty?” Grandma got to talk with her little granddaughter about why she is pretty (which is) because she’s a masterpiece made by God.  She was able to open up that conversation. Ninety percent of girls – starting when they are young – believe (they) need to look a certain way, that (they) need to be “pretty” to be liked.

JEC: It’s been really cool. I think part of the message that’s (also) hitting…is that romance element. We’ve been able to track some of the sales on Amazon because they do such a great job of doing (that). We’re listed in the romance category even though we’re kind of a family/all-ages film but because we have that romance element in it, that Christmas romance, we actually reached Number 4 in the romance category of new releases. A lot of people are out there purchasing the film on Amazon. I don’t know what those specific numbers are but those are ranked and it’s very exciting for a non-major theatrical or non-major network film to be in the Top Five new releases because the ones surrounding us were movies by Hallmark and major (studio) releases that are now being offered on DVD. We’re very thankful that our little film – kind of a mid-level film without that big major deal or that big theatrical run – has been able to perform well and resonate with audiences online.

JG: The opening week when we released, we outsold (expectations) on Amazon and on Walmart.com. Our distributor did not anticipate that large of a response. They actually had to go back into production to make more units to fill the shelves. They were able to get them (made) just in time for the Black Friday weekend.

JEC: We sold close to 500 just on our own (website) which is really, really good for a small little online store. So, that’s exciting. Let me tell you, if we’re doing that then it’s exciting to (consider) what’s happening with the (major) online sales.

JWK: With that success, do you see potential for a sequel?

JEC: We would love to do that. I think Jenn has the right strategy. We’re gonna let this film perform and let it grow and then we can try to get a new deal with a company that might be interested in the franchise itself, including the message and everything that goes along with it.  We would love to do a sequel. We’ve already been talking our writers, trying to figure out what kind of storyline we can do. Who knows? We’re definitely open to pursuing that.

A taste of southern comfort. 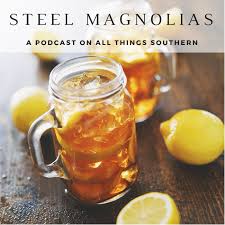 If you’re looking for a southern podcast with a friendly welcome, you’re in the right place! We are Laura Beth Peters (left) and Lainie Stubblefield (right)… Two sisters who love family, traditions, and all things Southern! Every Tuesday we are talking about southern culture! Bringing you an uplifting conversation straight from our table about life in the south.

So reads the home page of the Steel Magnolias podcast website that drops every Tuesday and has been steadily been building a loyal following serving up its first edition in just over two years ago.  I recently spoke with Laura Beth about the podcast’s appeal. She talked with me from her home base in Tennessee.

JWK: How did the Steel Magnolias podcast come about?

LAURA BETH PETERS: We started the Steel Magnolias podcast two years ago…in November of 2018. Our inaugural episode was on Thanksgiving. We intentionally launched with that because a lot of the topics we cover really relate to hosting and hospitality. So, we kinda thought what bigger event (is there) than Thanksgiving for a host or for opening you home? So, why don’t we launch with that.

My partner is my older sister. Her name is Lainie Stubblefield.

JWK: Who had the idea for the podcast?

LBP: I feel like we really came up with it close to the same time. We were both at that time really into podcast ourselves – just listening to everything from chefs that we like, to sermons, to everything in between. We were both always telling each other “Oh, I found this great podcast! I think you’d like it!” So, we were interested in (podcasts) from that vantage point. It was somewhere around 2018 that we started going “I’m not finding a lot about southern culture.” You know, we have magazine subscriptions to Southern Living and we know other places to find content for southern culture but, from a podcast standpoint, there really wasn’t a lot at that time that was being produced. The only things we could find were shows that were no longer producing. Maybe they were shows that had had a little run in 2015, 2016 or 2017 but they had stopped. So, I said to Lainie “Well, I’m interested in maybe trying to dig in and find out how to do this on the technical side” – because that’s a little bit more my gifting – “but we gotta make sure, from a content standpoint, that we have enough topics to really launch into this space for a long time because with a weekly podcast we’re gonna fly through topics pretty fast.”

JWK: So, before launching the podcast you actually involved in the marketing of faith-themed media, correct?

LBP: Yeah. That’s actually how you and I know each other. For about eight years I served as director of marketing at a company here in Franklin, Tennessee called Propeller (which) marketed faith-based entertainment, everything from children’s (content) to publishing to theatrical releases.  From Propeller, I went and was director of marketing for WTA (which) is also here in Franklin. That team really focused mostly on theatrical releases. At that time – around 2016 and 2017 – there were so many theatrical releases (with faith themes) coming. Just to stay active in that faith-based media category was enough. We didn’t really have to diversify ourselves anymore than that. I did that until November of 2017 and then I had my first son. He’s now three years old and I decided I really wanted to stay home with him. So, I still stay home with him and it was just during that first of being home with him that I really started getting an itch for doing something creative. That was when the podcast came to fruition.

JWK: What kind of reaction have you received?

LBP: It’s been great. It’s so rewarding to actually hear directly from people that are listening to the show. When I did marketing for films, we knew that people were showing up, we could watch box office sales or we could watch different purchases but I didn’t know those people individually. So, to have direct relationship and contact with people that are listening to the show is just remarkable.

Our hope is that people…feel a sense of joy and an uplifting entertaining spirit about the show. We also know that a lot of the stuff that we are sharing is real conversational and it’s (about) culture. So, you almost want to be talking about it as if you’re just sharing with a friend. So, the way that we start our intro is “There’s plenty of room at the table. So, pull up a chair.” We really have been so excited when people come to us and “I do feel like I’m at your table.” I feel like we are just chatting at the table…and that was our hope for how the tone of the show (would) come across and it seems like it is.

Postscript: Steel Magnolias can be heard via Apple Podcasts or virtually wherever you get your podcasts. During these times when there seems to be so much anger everywhere, it is a nice, friendly breath of fresh air.

In their own words: America's "Modern Warriors" tell their story to Pete Hegseth + FilmPreview: "Magic Max"
archives most recent
More from Beliefnet and our partners
previous posts

Here’s the latest from the crossroads of faith, media & culture: 11/23/22 The decision to release the Season 3 premiere of The Chosen in theaters has yielded surprisingly strong box office results. As a result, what was planned as a five day theatrical run has been extended all the way to December 1st.  With $8.75 […]

Here’s the latest from the crossroads of faith, media & culture: 11/21/22 Just in time for Thanksgiving (and National Adoption Month), the life-celebrating family drama Lifemark arrives on Pure Flix tomorrow (11/22). The film stars Kirk Cameron for whom adoption is a very personal subject. Our conversation follows the trailer. JWK: So, November is National […]

Here’s the latest from the crossroads of faith, media & culture: 11/18/22 Some news items that caught my attention over this past week or so. Quote of the Week: “Now more than ever, we’re short of workers, we have a population that is not reproducing on its own with the same level that it used […]

Is Robert Amaya the movie industry's busiest actor? + "Moonrise" on the horizon at Pure Flix

Here’s the latest from the crossroads of faith, media & culture: 11/16/22 Is it a sin to make a faith-based movie without Robert Amaya in it? No, it is not – but, ever since his film in debut in 2011’s Courageous. there’s just something about the guy. Audience respond to him and everyone wants to […]