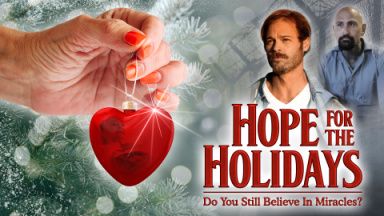 DTLA Entertainment (in association with ICON Studios) is releasing the dramatic film Hope for the Holidays on November 26th.  The film, starring film icon Sally Kirkland and George Stults (TV’s 7th Heaven), tells an inspirational Christmas story about a wayward young man going to prison for robbing a bank for trying to pay medical bills for his mother dying of cancer.  The movie is based on The Talking Tree, a short story by former Hells Angels leader George Christie. Independent filmmaker Ricky Borba directs.

The movie has a special meaning for Borba. During production he found out that his own mother was diagnosed with cancer. She tragically passed away just weeks later. Borba, a Christian, says making the film became a purifying experience and a way to honor both his mother and God.

He says “With the permission of the writer and producer, I was able to rewrite the dialogue of Georgia in the script to reflect the real-life conversations I was having with my own mother during her battle with cancer…Most of what Georgia says in the film, and especially the conversations she has with Danny, are conversations I had with my mom. I feel very fortunate to have been able to honor my mother like this.”

Kirkland felt an incredible sense of responsibility playing Georgia knowing that the character was so closely tied to Borba’s mother, noting “The idea of playing such a strong mother and son story was what attracted me to the script. It’s a film for all generations. It’s the kind of film we need nowadays.”

Others in the cast include Doug Hutchison (The Green Mile), Robert Lasardo (Psych the Movie), Todd Bridges (Different Strokes) and Jenn Gotzon (The Farmer and the Belle).

Hope for the Holidays is being distributed by Atlas Distribution and will begin streaming throughout North America on Thanksgiving Day, via Amazon Prime, iTunes, YouTube, Google and iScreening Room.

Also on Thanksgiving, the on-demand streamer FOX Nation is getting into the scripted movie business with the debut of the original holiday-themed film Christmas in the Rockies.

Produced by Brain Power Studio in association with INSP Films and FOX Nation, the story follows the journey of Katie Jolly, a driven young woman with aspirations to leave Jolly Lumber, her family business in the small town of Homewood behind for a career in New York City. Katie’s dreams come to a halt when her father’s sudden injury places the future of the company at risk. Saddled with looming financial troubles and committed to holding her family together, she also finds herself thrust into the community’s annual lumberjack competition.

During the film, FOX & Friends co-hosts Steve Doocy and Ainsley Earhardt make cameo appearances as Jolly Lumber customers, leading to an invitation for Katie to join the signature morning hosts on the curvy couch in New York City. The film is exclusive to the platform in the United States on video on demand until November 2021. In addition to Christmas in the Rockies, FOX Nation has acquired the rights to additional holiday movies including Christmas on the Range and Christmas on the Coast which are currently available on the service.

FOX Nation is a direct-to-consumer on demand streaming service designed to complement the FOX News Channel experience with a members only destination for its most passionate and loyal super fans. Featuring thousands of hours of content, the OTT product includes lifestyle/entertainment shows as well as historical documentaries and investigative series from a multitude of FOX News personalities at a cost of $5.99 a month/$64.99 a year. FOX Nation is available on iOS and Android devices as well as Apple TV, Web, Amazon Fire TV, Google Chromecast, Roku, Xbox One and Comcast Xfinity & Cox Contour platforms.

Here’s the latest from the crossroads of faith, media & culture: 05/25/22 Solar power. After two-and-half years of production time, the sci-fi audio drama Solar has soared to the top of the charts, reaching #2 in fiction on Apple Podcasts and #1 in Science Fiction. Described as “a journey to the heart of the solar […]

As "This is Us" departs, a look back at my five favorite TV series finales

Here’s the latest from the crossroads of faith, media & culture: 05/23/22 NBC’s This is Us wraps with its much-anticipated season finale tomorrow night (5/24). While, for whatever reason, I never watched the show enough to get into to it, it certainly garnered a large and loyal fan base during its six-season run. While I […]