Coming Attractions: “The Stray”, “Word of Life” and more

Here’s this week’s dispatch from the crossroads of faith and media.

And God made Pluto. Struck Films, Purdie Distribution and Motive Entertainment has announce the upcoming release of The Stray, a family film written and directed by Mitch Davis (The Other Side of Heaven) based on a screenplay by Parker Davis with Ken Brailsford executive producing. Set for release in select markets in the United States on October 6, 2017, the family drama tells the true story of how a stray dog dubbed Pluto impacts a struggling family. The Stray has received the Dove Family Approved seal for its portrayal of positive values and is a film you can take your entire family to see.

“It’s really not a stretch to say that Pluto gave me my life back,” said Mitch Davis. “He saved me and my family in more ways than one. And although The Stray reflects my personal story, I know there countless families across America who could say the same thing about a pet that greatly impacted them with its unconditional love – which is why I hope families will see this film together.”

Multi-award winning artist and songwriter Jeremy Camp’s latest single debuts today. Word Of Life can be found at all digital formats by clicking here. The song is the first single from Camp’s upcoming album slated for release this fall. 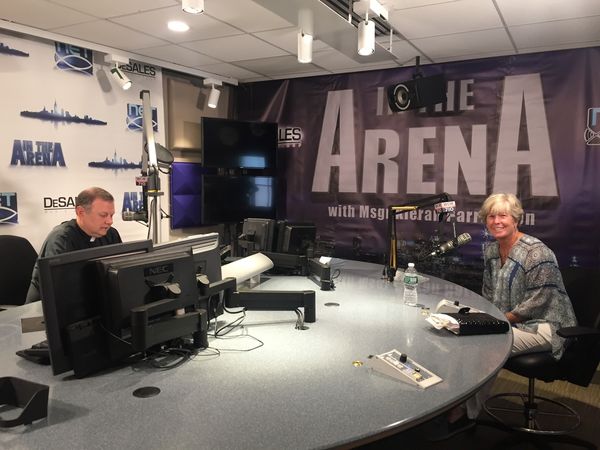 A true love story. Monsignor Kieran Harrington, host of NET TV’s In the Arena, invited Patti Ann McDonald, Mayor of Malverne, NY and winner of the 2017 Christopher Leadership Award, to speak about her award and life with NYPD Detective Steven McDonald, who died earlier this year. The program–that the Monsignor called the Independence Day show–will air on WOR 710 radio at 8 a.m. on Sunday, July 2, 2017. Mrs. McDonald is a living witness to the Christopher ideal that “It’s better to light one candle than to curse the darkness.”…I do some booking work for ITA and would like to thank Mayor McDonald for agreeing to do the wonderful interview and  Jeanne Byington of JM Byington & Associates for getting out the word.  More here. In the Arena, hosted by Diocese of Brooklyn Vicar for Communications, Kieran Harrington airs Sundays in NYC on WOR 710AM at 8 AM (ET), Relevant Radio 1430AM at 1 PM, and NET TV at 8 PM ET and Catholic TV in at 10:30 PM ET!

What’s UP with Emmy? Charley Humbard, UP TV’s Founder and CEO, was honored Saturday night with the 2017 southeast Emmy Governors’ Award, a special honor recognizing exceptional achievement. The Board of Governors Awards are for truly outstanding and unique accomplishments or for achievements of some duration and durability. The award can be given to an individual, a company or an organization for outstanding achievement in the arts, sciences or management of television, which is either of a cumulative nature or so extraordinary and universal in nature as to be beyond the realm of the awards presented in the categories of achievement.

The Case for Christ hits Blu-ray/DVD market. One of the best-reviewed faith-based films of 2017, is coming to home entertainment on  Aug. 15, 2017, from Pure Flix Entertainment. The film will be released into the general consumer market by Universal Pictures Home Entertainment.

The film is based on the true story Lee Strobel (who I worked for as a segment producer on his Faith Under Fire PAX-TV series) who in the 1980s was a hard-driving journalist and atheist who decided to use his investigative skills to disprove Christianity. To say the least, the results were not what he anticipated.

The Case for Christ is rated PG and directed by Jon Gunn (Do You Believe?) from a script by Brian Bird (Captive, Touched by an Angel). The film is produced by Michael Scott, David A.R. White, Russell Wolfe, Elizabeth Hatcher-Travis, Brittany Lefebvre, Karl Horstmann and Alysoun Wolfe.

What’s UP with EMMY? Charley Humbard, UP TV’s Founder and CEO, was honored Saturday night with the 2017 southeast Emmy Governors’ Award, a special honor recognizing exceptional achievement. The Board of Governors Awards are for truly outstanding and unique accomplishments or for achievements of some duration and durability. This award can be given to an individual, a company or an organization for outstanding achievement in the arts, sciences or management of television, which is either of a cumulative nature or so extraordinary and universal in nature as to be beyond the realm of the awards presented in the categories of achievement.

UP TV, which began life in 2004 as the Gospel Music Channel before rebranding as UP TV in 2013 , focuses on uplifting programming aimed at  families of all shapes, sizes and complexities.” The network has seen tremendous ratings growth this past year as its slogan “We Get Family” resonated with viewers.  The network also operates the streaming service UP Faith & Family, available through Amazon Prime, Comcast Xfinity, Dish or upfaithandfamily.com.

Prior to founding UP Entertainment, Humbard served as a senior executive at Discovery Networks, responsible for the development and launch of seven digital cable network brands. Additionally, Charley was a founding member of Discovery International Networks charged with launching the Discovery Channel Networks in 140 countries and creating operations facilities on three continents. Son of the country’s first television minister, Humbard began his career writing and recording music and performing on television for the Rex Humbard Worldwide Ministries.

BTW, this weekend being Father’s Day and all, you might want to checkout Date My Dad ((9:00 PM ET), UP’s new scripted dramedy series starring Barry Watson as a widowed father of three daughters and Raquel Welch as has his late wife’s mom and grandmother of the kids. It’s a kindhearted, enjoyable family show that is all too missed on broadcast network television (particularly, since the unfortunate cancellations of ABC’s Last Man Standing despite strong ratings). It seems cable is becoming the place to go for family-friendly scripted fare.
(Above photo from Marcel Williams/UP TV).

Prayers for dad. As Father’s Day nears, Abide, the Christian meditation and prayer app, conducted a survey among its four million users shows the most common prayers for Dad. Results of the online survey revealed physical well-being, protection and salvation are the most common prayers offered for fathers. Nearly 70 percent of users surveyed shared their concern for their dad’s health, including battles with dementia and heart disease. Approximately 50 percent said safety is their most important prayer request, and 41 percent pray for their dad to come to know and follow Jesus.   “These Father’s Day survey results show that just as our parents never stop caring or worrying about us, we also do the same for them,” said Neil Ahlsten, co-founder of Abide. “We want our dads to be around for as long as possible, see them succeed, and spend eternity with them. These are all fears and hopes we, as children, can relate to; they connect us as people.”

God is calling you forward – no matter how much you messed up. I will heal their waywardness and love them freely. – Hosea 14:4 – This was in my inbox this morning from the National Association of Christian Recovery.

Encourage one another and build each other up – 1 Thessalonians 5:11
John W. Kennedy is a writer and entertainment media consultant.

Here’s the latest from the crossroads of faith and media: Continuing my list of the 25 Most Inspiring/Feel-Good TV series in the history of broadcast television… The rules: Each show chosen has to have aired for free (the way TV should be), feature ongoing characters, have a positive theme and, especially, be liked by me. […]

The 25 most inspiring, feel-good TV series of all time: #1 - All in the Family

Here’s the latest from the crossroads of faith and media: It’s the dog days of summer in a year that will go down as one of the stressful in modern American history. Between the pandemic, crippled economy, soaring crime rates and a media and politicians that seem more intent on fanning racial and cultural divides […]

Here’s the latest from the crossroads of faith and media: Fox News Channel will broadcast a one-hour special entitled One Nation hosted by Lawrence Jones this Sunday night (7/26) at 10:00 PM ET.  The program will examine the state of race relations in the United States from the perspectives of civil rights activists, legislators, law […]