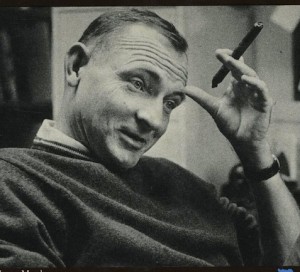 You may not have heard of him, but a Christian man of letters, one of our greatest, just passed away. A native of Georgia and educated at its University,  Marion Montgomery was a prolific writer. His works include three novels, short stories, poetry, literary and cultural criticism, a trilogy on Flannery O’Connor, Nathaniel Hawthorne, and Edgar Allan Poe, and a number of books that applied the Thomistic tradition to contemporary culture and the great works of American literature.

Montgomery’s earliest works bear the stamp of the “Fugitive-Agrarian Movement,” whose central figures, such as Donald Davidson, Robert Penn Warren, John Crowe Ransom, and Andrew Lytle became major figures in the literary world of the 40s and 50s. Marion Montgomery was a product of this movement’s second generation. But, when his fiction and poetry never received the attention it deserved — and still deserves — he turned his attention to the critical and interpretive works that earned him a national reputation and small but devoted group of admirers.

I was privileged to visit Marion and his wife Dot many times at their home in Crawford, GA before I moved to the East coast. We had a reunion of sorts when I devoted four of my “Church and Culture Today” shows on EWTN to interviewing Marion, and I hosted him several times as a speaker at meetings of the American Maritain Association.

I recall that late scholar Ralph McInerny from Notre Dame had great regard for Montgomery’s work, as did so many others who sought to bring the Thomistic tradition into contact with literature and culture. Montgomery may have been called a “Hillbilly Thomist” but his learning was broad and deep — it cut to the core of Western civilization, its metaphysical ailments and spiritual confusions.

If you’ve not discovered his books you have quite a treat, no, a treasure, waiting for you. I was privileged to know him and learn from him. One of the best places to start reading Montgomery is his “Possum and Other Receipts for the Recovery of “Southern’ Being.”

"How to Be" at Thanksgiving

Thanksgiving may be the most underrated day in our annual rota of holiday observances. Lost in the midst of stories about our country’s native Americans bringing food to the struggling British settlers is a more metaphysical and spiritual reality that makes a day of thanksgiving about far more than a remembrance of a single […]