Washington Post Whores (Excuse Me, “Salons”) Itself Out For Profit? 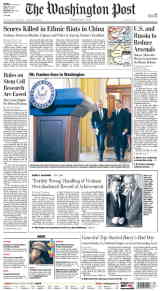 ow the newspaper business is hurting, and hurting bad… but when it comes to journalistic ethics, the Washington Post is supposed to be among the finest institutions in the nation, if not the world. But now, the people who brought us Woodward and Bernstein are accused of planning to host a series of “salons” for lobbyists, where, for as much as $250,000, health care execs and lobbyists could buy exclusive access to high-profile Obama administration officials, as well as the Post’s own reporters and various political figures, all in an “off the record” setting.

After the scandal broke, the first event was hastily canceled, and now the Post is backpedaling furiously, attempting to explain the situation.

A health care lobbyist is apparently the hero in this story, if you can believe it, coming forward to disclose a flier he received detailing the Post’s invitation, which he felt to be an ethical conflict. (Uh, yeah.) The title of the flier was Underwriting Opportunity: An evening with the right people can alter the debate:

“Underwrite and participate in this intimate and exclusive Washington Post Salon, an off-the-record dinner and discussion at the home of CEO and Publisher Katharine Weymouth. … Bring your organization’s CEO or executive director literally to the table. Interact with key Obama administration and congressional leaders.”

According to Politico, which broke the story, the flier goes on to say:

Yikes. Charging money for access to high-placed sources and promising all resulting discussions will be “off the record” smacks of an attempt to profit off what ought to be free and fair access for all, plus a dereliction of the paper’s journalistic responsibility to deliver all the news, regardless of where it was derived.

The paper’s publisher, Katharine Weymouth, denies any wrongdoing. She claims the Post’s marketing department misrepresented the nature of the event in the flier that was distributed, and that safeguards were in place in the newsroom to ensure that journalists would not compromise their integrity by pandering to the corporate sponsors in any way. She further claimed not to have vetted the flier before it went out.

Well, maybe that’s true. But I’m suspicious, to say the least. When you send out a party invitation, don’t you go over the wording before you seal the envelopes? And if you don’t, aren’t you still responsible for what goes on during it? I mean, if you mean to say ‘black tie optional’ but the printer types ‘clothing optional,’ it’s still on you if granny faints when she gets an eyeful.

Basically, what I’m saying is, it all seems ethically iffy to me. Plus, the NY Times’ David Carr writes that at least two of the invites (though not the fliers) to these salons went out to high ranking politicians from the personal email address of Ms. Weymouth herself, so she seems to have been deeply involved in the planning of the event.

While I can’t feel too sorry for lobbyists being squeezed, I do feel strongly that the media must uphold its long and vital tradition of being an independent and trustworthy information source. The fourth estate must not auction itself off, no matter how bankruptcy threatens.

What do you think of the Washington Post Salon Scandal?