Do We Tip To BE Generous, Or To SEEM Generous? 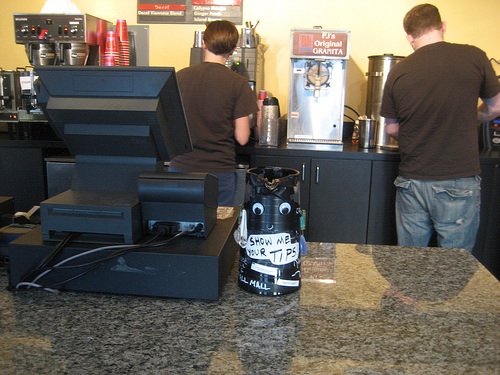 And does the intent matter?

I’m settling in to do some writing at my local
coffee joint, getting all prepared to talk…you know…ethics ‘n’
stuff. I make sure I buy enough (a
black & white cookie and a large decaf latte) to justify the amount of time
I’ll be hanging around taking up one of their tables (maybe half an hour, tops). I
only grab as much sweetener as might actually, feasibly sweeten the coffee I have, rather than stuffing 80 packets in
my purse, the way some people do.
Heck, I don’t even plug my laptop in without first making sure the staff don’t
mind.

Basically, what I’m trying to say is, I believe in good
restaurant etiquette. I know these little java joints have a slim profit
margin, and nibblers like me aren’t helping by hogging their tables, mooching
off their internet while we nurse a single bagel for three hours.

Which is why I tip at least a buck with each purchase when I plan to hang out
in a coffee house to work, even if all I’m getting is a beverage that costs
roughly that same amount.

Yet when I dropped my dollar in the bucket today, I got
grumpy. Not that I resented spending the money. If I want to save cash, I can
work from home. And the baristas are quite nice at the café I frequent. So it wasn’t the money or the service that got my goat.

The problem was, they
didn’t notice.

I’m reminded of a classic Seinfeld episode, “The
Calzone.”

In it, George so badly wants his ‘generous’ tip to get noticed, he ends up getting accused of stealing from the tip jar when he tries to take his money back and drop it in again later when the guy behind the counter is actually paying attention.

I totally get that.

Much as it pains me to admit it, I don’t just do good deeds to do them, I do them to be seen doing them.

Why is that? Would a truly decent human not worry about whether her thoughtful behavior goes unnoticed? Does it make me a crummy person if I want recognition for doing the ‘right’ thing?

Yeah. Maybe somewhat. But in my opinion, ethics, decency, and all that are really about the social contract; i.e., doing our part to make sure society functions. We get something, we give something, the world continues to go around. Virtue may be its own reward, but a little acknowledgement makes my coffee taste that much sweeter.

What do you think? Tell us your thoughts about tipping, about virtue, about societal norms… or even coffee house etiquette.

Good Neighbors: Respect Privacy, or Leap In to Lend a Hand?
archives most recent
More from Beliefnet and our partners
previous posts