In Search of the Antlered Goddess of the Ways 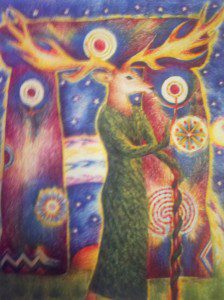 The British visionary artist Chesca Potter says that when she moved to London, she had a vision of an immense goddess figure, dressed in green and gold, over the church of  St Pancras. This is the oldest church,  in the city, founded (according to legend) by Helen, the mother of the emperor Constantine, who is famous for her dreams; Helen is shown dreaming on the cover of my book The Secret History of Dreaming. It was another Helen – or rather Elen – who seized the artist’s imagination. In her visions, Chesca saw her as an antlered woman. She painted and sketched several versions of this antlered goddess. My favorite is the one shown here, which appears on the card labeled “Lady of the Ways” in John Matthews’ Celtic Shaman’s Pack.

Cernunnos, the male version of the Antlered One, is famous. It is less well known that there is solid evidence for the ancient worship of the Antlered Goddess. In the far north, she was a Reindeer Goddess. Female reindeer sprout antlers too, and that the females grow bigger racks than the males! In early times reindeer were native to Scotland. Reindeer bones have been found in three caves near Inchnadamph, a hamlet in Assynt, Sutherland, Scotland. The name of the hamlet is an anglicisation of the Gaelic Innis nan Damh, meaning “meadow of the stags”. In the British Museum there is a bronze figure from the Iron Age, discovered at Besançon in France, of an antlered goddess (see below).

I am always delighted to come upon fresh material on the ancient forms of the Goddess. Elen is very special, for me, because she is the patron of roads and gates between the worlds. In Chesca’s image, she stands before a dolmen gate embellished with symbols suggesting access to the Upper, Middle and Lower worlds.  When you travel the British isles, you may feel Elen’s soft footfall – beneath the traffic and modern construction – along the deer paths and ancient trackways and in the the lapping of quiet streams.

Elen is Lady of the Ways in many senses. Most significant, for me, is her role as Lady of the Dreamways. In the great cycle of Welsh epic poems known as the Mabinogion, Elen calls a king to her in his dreams, and he finds her embodiment in the physical world when he learns to use his dreams as a map and to follow their roads.

To know more of all this, we must study the literature and the archaeology, and we must dream on it. We can do this even on the other side of an ocean from Elen’s ancient trackways, especially if our ancestors knew her – and if we know the right tree.

I know a Camberdown Elm, transplanted from Scotland to a sloping lawn in western Massachusetts. I call it the Village Tree because its canopy resembles a collection of thatched cottages, especially in late fall, when the leaves are matted dull brown. In that season, I walked down to the elm in a light, cold rain. I caressed the scaly bark of the trunk, and wished the elm health and renewal. A wooden seat had been placed under the tree and I sat there, open to vision without insisting on it.

Immediately Deer appeared to me. This time – the first occasion I remember – the antlered deer was wearing a saddlecloth. The saddlecloth was a deep red with a brocaded border. I understood that I was to get on the deer’s back and let it lead me. So I swung myself up, as I would have mounted a horse. Instantly we were off at a terrific pace, heading north across a landscape of frozen marshes. I looked ahead, and saw a huge orange disk very low on the horizon. It seemed we were flying straight into the face of the sun.

Instead, I found myself in the presence of an immense being. She appeared as a beautiful, mature woman, white-skinned, deep-bosomed – and wearing antlers. When she invited me into her embrace, we became the same size. I understood that I was entering the embrace of an Antlered Goddess. Then I shot straight up through the sky, into the face of the Moon, and encountered a number of beings with historical identities in early Europe who gave me specific information I was able to verify and document in subsequent research. Another exercise in dream archaeology, but with even broader resonance.

A big question was put to me recently by a questing young friend: “What is the white man’s spiritual inheritance?” he went on: “it seems there is a dearth of relevant, culturally appropriate spiritual practice for white people.” After gently chastising him for using the phrase “white man“, i suggested that the answer lies in dreaming. Active dreaming is crucial to collective soul retrieval, to recovering and living our authentic spiritual inheritance.

Let me add that Elen of the Dreamways has a double or close sister across the North Sea in Nehalennia, who was venerated at Celtic sacred sites on what is now the coast of the Netherlands. She was the patron of voyagers; seafarers and traders made offerings to her for safe passage and success in their transactions. Her name may mean “Steerswoman” or “Pilot”. She is depicted as a lovely young woman enthroned within a seashell, with a basket of fruit on her lap and a dog nearby, gazing up at her adoringly. Often she has her foot on the prow of a ship, and a boat rope in her hand.

Nehalennia’s other close animal companion is the dolphin. She is the patron of astral as well as physical journeys, just as Elen is the maker of roads as well as dreamways. For the Celts, the happy afterlife on the Islands of the Blessed requires a crossing by water. And in ancient Europe (as in Polynesia) one of the favorite forms of transportation for the Otherworld voyage is the dolphin. Ripe fruits are often carved over the top of Nehalennia’s shrines. She offers abundance and ever-renewing life, as well as safe passage through the Otherworld, before and after death.

Illustration “Lady of the Ways” by Chesca Potter from The Celtic Shaman’s Pack by John Matthews, published by Element.

RETURN OF THE ANCIENT DEER: A JOURNEY INTO CELTIC DREAMING