When I was writing my book Dreaming True, I asked for guidance from the night on how to bring the gifts of dreaming to a broader audience in our society. I dreamed I was teaching the history of the Underground Railroad to a single African-American mother caring for her children in the projects. What is the connection?Harriet Tubman is an exemplar of how dreaming can contribute to liberating people and communities from an unjust order. This 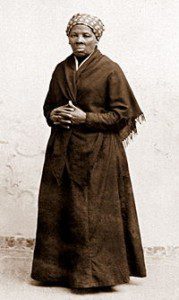 famous conductor of the Underground Railroad helped many escaping slaves to get to freedom in the years before the American Civil War. She used dreams and visions of maps to get parties of fugitive slaves across otherwise unknown terrain, even across a flooded river. I tell the story of Harriet Tubman as a dream tracker in my Secret History of Dreaming.

In a shamanic journey, I once saw Harriet Tubman accompanied by guides of three kinds: a winged angelic being in white, a leopard and a West African forest spirit. Here I want to explore how West African traditions of shamanic dreaming may have contributed to her remarkable abilities.

Franklin Sanborn, writing in 1863, described Harriet Tubman as “the grand-daughter of a slave imported from Africa” with “not a drop of white blood in her veins.”  In 1907, a reporter for the New York Herald plucked this from her memories: “The old mammies to whom she told dreams were wont to nod knowingly and say, ‘I reckon youse one o’ dem Shantees, chile.’ For they knew the tradition of the unconquerable Ashantee blood, which in a slave made him a thorn in the side of the planter or cane grower whose property he became.”

The “Ashantee”, or Ashanti, are a matrilineal people of the forests and highlands of Ghana, known in Harriet’s time as the Gold Coast. Recollections of gossip heard in childhood are not evidence that Harriet had Ashanti blood, but they suggest that the Ashanti were known where she grew up, and she was associated with them in people’s minds.

The shipping records of the Chesapeake slave trade suggest that Harriet’s ancestors were brought to America from this part of West Africa. Nearly all of the slaves carried to Maryland ports came direct from Africa, and the vast majority came on big London vessels that picked up their cargoes along the Gold Coast or from Upper Guinea.

Harriet said she inherited special gifts — including the ability to travel outside the body and to visit the future — from her father, who

“could always predict the future” and “foretold the Mexican war”. Stronger than other girls, she spent a lot of time with Ben Ross in the timber gangs. In their quiet times in the woods, they may have revived something of the atmosphere of the Sacred Forest of the Ashanti, and the practice of West African dream trackers accustomed to operating outside the body, sometimes in the forms of animals.

We have an interesting source on Ashanti dreaming in Captain Robert S. Rattray, a British “government anthropologist” stationed in the Gold Coast before and after World War I. Rattray became a passionate student of the Ashanti, who called this Scot “Red Pepper” because of his blazing red hair. Though sometimes baffled by the mobility of consciousness among the West Africans he interviewed, he did his best to record Ashanti dream practices.

“To the Ashanti mind,” Rattray explains, “dreams are caused either by the visitations of denizens of the spirit world, or by spirits, i.e. volatile souls of persons still alive, or by the journeyings of one’s own soul during the hours of sleep.” In the Ashanti language, “to dream” is so dae, which literally means “to arrive at a place during sleep” — implying travel.

For the Ashanti, dream incidents are real events. If you sleep with another man’s wife, for example, you are held to be guilty of adultery and may be punished for it.

Flying is a common experience in Ashanti dreams. “If you dream that you have been carried up to the sky…and that you have returned to the ground…that means long life.” This certainly held true for Harriet Tubman, who lived to be at least ninety-one.

Rattray describes an Ashanti practice for disposing of a “bad” dream by confiding it in a whisper to the village rubbish dump, which may also be the communal latrine.

One of Rattray’s informants described how his dead brother guided him on the hunt. “I often dream of my brother who was a hunter, and he shows me where to go. Any antelope I kill, I give him a piece with some water.” The same man’s dead uncle gave him dream prescriptions. When a child was ill in the house, his deceased uncle showed him some leaves to administer as part of the medicine; “I did so and the child recovered.”

Ashanti hunters and trackers walked very close to their guardian animals. Shifting into the energy body of a leopard, or a nocturnal antelope, or a fish eagle, they traveled ahead of themselves to scout the land and find the game, or the place where an enemy force was advancing.

On big questions, they sought a second opinion through divination. A typical method was for the diviner to shake a set of symbolic objects — stones and bones, a hairball, a root, a seed pod, a snail shell — from a skin bag. The diviner grasped the forked end of a stick, while the client held the other end, tipped with metal. In their hands, the wand quivered and pointed at one object after another, making a story that was then read by the diviner.

How much of this traveled to Maryland with Tubman’s ancestors? Maybe far more than has been generally understood. West Africans brought forcibly to North America did not lose their identity and traditional practices overnight. Recent archaeology shows the survival of key elements of West African culture under slavery in North America: in the miniature boats and other items placed in graves, in collections of “anomalous artifacts” that may have come from diviner’s bags  And in the 1820s, when Minty Ross (as Harriet was then known) was growing up, the Christianization of African slaves had barely begun.

I recorded a television interview on the sources of Harriet Tubman’s intuition at Mosswood Hollow, a retreat center near Duvall, Washington, in the midst of leading my creative writing retreat, “Writing as a State of Conscious Dreaming”. The senior cameraman was excited by my discussion of Harriet’s probable connection with Ashanti tradition. He had been to Ghana and filmed Ashanti rituals, and spoke of the powerful effects of the Ashanti “talking drums”. Another wink from the universe.

`
Adapted from The Secret History of Dreaming by Robert Moss. Published by New World Library. Source notes for quotes and facts here are in the book.