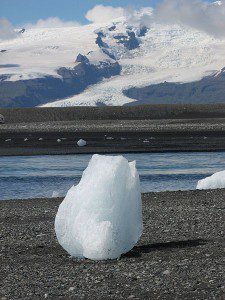 Icelanders make a practice of listening to the larger reality. Construction of a new highway south of Reykjavik is currently on hold while the supreme court considers a law suit filed on behalf of elves. A group called the Friends of Lava contends that the road would not only damage the ecology of natural lava fields but would disrupt a community of elves.

Jónsdóttir, a woman seer who operates an “elf garden”, believes the area is thickly settled with elves, huldufolk (hidden people), and dwarves. She told the Atlantic that a curious rock in the lava field houses “a very important elf church,” which lies directly in the path of the projected highway. Speaking in more analytical language, an Icelandic ethnologist suggested that talk of elves expresses “a sort of primitive environmentalism” – that the “hidden folk” speak for the land in a way that the local population are willing to hear and respect.

Álfhólsvegur (Elf Hill Road) in Kópavogur is a famous monument to the elves’ resistance to development that threatens their homes, and the willingness of Icelanders to listen. In the 1930s, it was planned to drive a road through Elf Hill, known to the locals – as the name suggests – as a traditional elvish stronghold. Nothing seemed to go right with the project. Machines broke down, money ran out, is named after it. The project was abandoned fro half a century. When itw as revived, rock drills broke and workers flatly refused to go near the hill.  Another drill was fetched but that one broke as well. Both drills broke to pieces and the workers refused to go near the hill with any tools after that. The Álfhóll is now protected by the city as a cultural heritage site. Go to Kópavogur today, and you can drive down Elf Hill Road. It narrows abruptly, giving plenmty of rooms to the elven neighbors.

Perhaps it is not surprising that in a country where 62 percent of the population – according to a recent survey – think that elves may be real, dreams have wider currency than in most Western societies.

Iceland is a country where dream fires burn among the ice, along with the geysers and volcanoes. Most Icelanders believe in dreams and follow their guidance to a degree that is remarkable among modern Western societies.  A Gallup survey of 1,200 Icelanders in 2003 revealed that 72 percent found meaning in their dreams; many reported dreaming the future and sharing dreams regularly within their families. More than half the respondents said they had experienced lucid dreaming. Over 70 percent believed that dream precognition is real, and over 40 per cent reported personal experiences of precognitive dreams.

The Icelandic language distinguishes vital categories of significant dreams, such as dreams of the future (berdreymi) and dream visions (draumspa). We can track Iceland’s dreaming traditions back through the Eddas and the sagas. In a classic study, Dreams in Old Norse Literature, G.D.Kelchner found 530 dream references in old Icelandic literature. In the V öluspa, even the gods go to wise women for help with their dreams.

In a scholarly article in the journal History and Anthropology,  Adrienne Heijnen provides fascinating insights into the respect that Icelander accord to dream visitations from the deceased, especially when it comes to naming babies that are on the way. It is widely believed among Icelanders that the deceased visit the living in dreams aðvitja nafns, “to seek a namesake”.

Ten percent of Icelanders surveyed by the Social Science Research Institute of the University of Iceland reported that they had received dream visitations from deceased persons who expressed the desire to pass on their names to children who had not yet been born. No less than 75% of the group believed that this is possible.  Heijnen explains that it is believed that “through the naming of newborn children with the help of dreams, substance can flow from the dead to the living, who are often, but not necessarily, genetically related.”

Heijnen reports the case of a woman named Sigrun, who was killed by an avalanche while hiking with her boyfriend. After her death, Sigrun visited her friend Helga in dreams. The dreams became more frequent and more pressing when Helga was pregnant with her oldest daughter. “Sigrun came to me,” Helga began, whenever she recounted one of these dreams; she had no doubt that her deceased friend had visited her.  She told her dreams to her mother, who became convinced that Sigrun wanted to give her name to the coming child. Helga agreed the baby would be named Sigrun.  After the christening, Helga dreamed of her deceased friend as a joyously singing head and took this as confirmation she had done right.

The typical dream visitor who comes seeking a namesake is a deceased member of the immediate family. But Icelanders also report similar visitation from drowned sailors, deceased friends, neighbors who died in accidents and “hidden beings” called Huldufólk or alfar, said to live in rocks and hills, who may want to give their names to the newborn. And a boy was named Gabriel because the archangel Gabriel appeared to his mother.

It is widely believed that when parents refuse a request from the spirits to give their name to a child, they expose the child to danger. a A woman who died young from asthma, supposedly because she was not given the name an alf woman had told her pregnant mother in a dream, because the priest refused to accept it.

Clearly, there is more here than we generally understand when we talk about picking a name for a baby. Heijnen notes that in Iceland “a name is supposed to carry certain characteristics, or qualities or affects. Namesakes are sometimes though to share aspects of their personality.”

First names are unusually important in Iceland. You see that when you open a phone book; the entries are arranged by first names. (Last names identify Icelanders as the child of a parent, usually the father, by adding “son” or “daughter” to his or her first name.) The general preference is to give a newborn child the first name of one of the grandparents, but a dream visitation will override this, as in the case of Sigrun. They say, “One may not let a deceased person down.”  As  one Icelandic woman dreamer puts it, “You may not have listened to a person when they were alive, but when they have died, you had better listen up.”

Let’s notice, in all of this, how Icelanders understand, as a matter of common experience, that dreams can be transpersonal, social and objective phenomena, not simply productions of the personal subconscious. This understanding is built into the Icelandic language. When you tell a dream in Icelandic, you might begin by saying, “It dreamed me a dream” [Mig dreymdi draum] As Heijnen puts it, “Dreaming in Iceland is not considered to be a withdrawal within the self, but a way of disclosing and relating with ‘the world.’”

Quotes are from Adrienne Heijnen, “Relating through Dreams: Names, Genes and Shared Substance”  History and Anthropology, Vol 21, No.3, September 2010, pp. 307-319