Dreaming 9/11, before and after 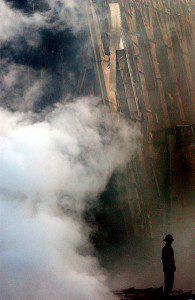 One of the lessons of the horror on September 11, 2001 is that we need to rely on human intuition, as well as technology, to safeguard our liberties and our loved ones. Especially the intuitions that come through in dreams. Dreamers from around the world shared dozens of dreams with me that appeared to contain highly specific previews of the disasters; several of the most specific dreams were shared in groups or via email before the calamity, so there was no doubt about the accuracy of the reporting.

The urgency of developing a discipline of dreaming – to identify and clarify possible precognitive messages in dreams, and to share the information in a helpful and timely way – is now abundantly clear. We also need to steer our society towards a greater respect for dreams and dreamers. In this way, we will not only construct a powerful first-line defense against future assaults; we will open profound ways of healing our wounds, as individuals, families and nations.

Dream Warnings of the Terror Attacks

The horror may have been foreseen, not by intelligence agencies but by the intelligence of dreams. In November, 1998, in one of my personal active dreaming circles, a woman shared a dream titled “The End of the World” in which she was horrified to see U.S, planes attacking U.S. targets, including Washington D.C.

Less than two weeks before the terror attacks, a Los Angeles woman called Katy dreamed that four planes crashed in a single night. Here is Katy’s dream report as she shared it by email with her dream circle on the morning of August 30:

Four Planes Crash in One Night

I’m in a house that is near an airport runway. I’m horrified and fascinated as I realize plane after plane takes off and doesn’t make it. They get up in the air and either explode or crash somewhere. I’m aware of it but not sure if I am hearing about it on the news later or ‘just know’ that three planes have gone down one right after the other.

I go outside where I can see the runway and I see the silhouette of a fourth plane. I’m looking at its underbelly as it goes straight up to the sky. It’s going too slow and I realize it is going to tip over and land on its back right there in front of me and crash on the ground.

I call 911. It takes several minutes to get through. I realize this is the small airport in Concord,NH because my mom and dad are in the house with me. My mom says I should hang up because “they must know about it already”. I’m screaming at my parents to go outside and look! They are like zombies, side by side in the bathroom brushing their teeth getting ready for bed. At last, the 911 people take my call and it turns out I am the first one to report the tragedy.By the time I go outside, the plane is totally incinerated. Nearby someone has made a huge mound of ashes/sand. People have gathered and stuck mementoes and flowers and scraps of debris belonging to the passengers onto the mound so it is a memorial. I see sticks of incense stuck in the mound everywhere, wafting smoke up to the night sky. I go and kneel by the memorial heap and I find myself crying for the enormous loss.

There are some remarkable correspondences between Katy’s dream and the events of September 11. She has three planes that “explode or crash somewhere” and one that hits the ground, like the fourth hijacked plane that went down inPennsylvania. She calls 911, like the passenger on the fourth plane who made a 911 call from the restroom. “911” may also be the date of the disaster – 9/11. Katy’s dream location is an airport inNew England near Boston;Concordis 50 miles fromLogan, where two of the planes were hijacked. The smoking heap of ashes closely resembled the scenes Katy witnessed on TV on the day of the disaster.

Some of the dream previews of the disaster date from long before the terror attacks.

A Massachusetts man who grew up in lowerManhattan, realized, to his horror, that he had dreamed the disaster 18 months before it took place – from the perspective of a victim. In the spring of 2000, Mike dreamed he was killed by an airplane engine falling from the World Trade Center. He did not understand the dream until he saw images of parts of an airplane engine among the rubble on 9/11, and then learned that a close friend was killed in the Trade Center that day.

How can we know what sense to make of our dreams of the future before events, perhaps terrible events, catch up with them? How can we clarify our waking intuitions and distinguish objective data from subjective projection? By an everyday dream practice that involves:

Dream Help for the Departed

Dreamwork is soulwork. Providing means of communication and guidance for the thousands of victims of mass murder who were savagely ripped from their bodies will be a critical aspect of this work. Active dreamers know that communication with the departed is perfectly natural in dreams and that it can become a source of deep healing and soul guidance. In dreams, we all have a direct line to the other side.

Dreams shared with me by many people in all walks of life in the immediate aftermath of the terror attacks suggested that many of those who had been murdered would need gentle guidance in understanding their circumstances, conveying messages to survivors, dealing with unfinished business, and embarking on their afterlife journeys.

In the immediate aftermath of the tragedy, some of the departed encountered in dreams and intuitive visions were still trying to reach their families on the phone, or finish up some office work. Some of the emergency workers who were killed in the collapse of the second tower appeared to be still bent on carrying out their rescue missions, as if their trucks and their bodies had not been buried under the rubble. Some of us found ourselves guided to approach these brave souls and innocent victims to help them as best we were able.

My prayer is that we will use the gifts of dreaming to safeguard our way of life, rescue souls on both sides of death and move from war into healing.

This is an excerpt from an article I wrote in the immediate aftermath of 9/11. Its conclusions and examples are valid today, so I am posting it on the anniversary of the tragedy.