Do we dream mass events and earth changes in advance?

We humans are living on the planet and in a sense nothing that is human or affects the planet is really foreign to us.  We might think it is but we’re all connected. Even if only by the fact that we’re going to see the news or be impacted by something that happens on the other side of the world, we are connected.  So it’s not strange that we would dream or intuit big events that may not seem to be directly connected to us but will be part of the collective experience of our kind on the planet.

Mass events seem to throw a shadow before them, and that shadow is most visible in patterns of dreaming. I think of Jung dreaming again and again of a terrible blood-red tide spreading across Europe, prior to World War II, and the patterns of similarly ominous dreams he noticed among his patients. Before a mass disaster like 9/11 or Hurricane Katrina or the Japanese tsunami or whatever, lots of people report dreams which later on seem to have predicted or foreshadowed what came.  Sometimes the dreams turn out to have foreshadowed the news of the event rather than the news of the event itself.  I remember after 9/11 somebody I knew asked me to look again at a dream report that he’d sent me two weeks before 9/11 in which he described something he’d written two weeks before 9/11. He described something resembling part of an airplane engine or propeller lying in rubble in a city street and he said he saw that scene on the TV, on 9/11, on the day.

So he had previewed what he saw on the TV set on the news on the day of 9/11, not the event itself but the TV coverage which of course traumatized lots of people.

What are prophetic dreams?

A prophetic dream is a dream relating to a mass event that affects a large number of humans.  If it’s a smaller event affecting a small number of humans we would call it precognition. or premonition, I reserve the word prophetic for huge events, the Asian tsunami or hurricane Katrina or 9/11 or the famine in Egypt.  We do dream into those things.  It’s sometimes difficult to figure out what to do with the information, but we can learn from some  celebrated dreamers in history.

Joseph, when asked to interpret Pharaoh’s dream, not only told him that it foreshadowed a condition in Egypt that would cause famine for the country but helped him to develop a practical strategy to avoid the famine. Let’s understand what the Bible is telling us about dreams and prophecy in this passage. A dream interpreter who was himself a powerful dreamer helped to avert the starvation of a whole people, by reading a dream correctly and then counseling the appropriate action to take.  That’s a  huge thing, one of many examples from history and scripture of prophetic dreams.

In some cultures, prophetic dreams are held to come from God or a certain individual deity, or from an ancestral spirit, or a spirit of nature. They may arise from the web of connection between everything that is alive and conscious in our world.

Have you had prophetic dreams of your own?

I’ve had such dreams, but my attitude towards the future and towards destiny is very fluid and flexible.  My attitude is this.  If I can see any kind of future I might be able to change it for the better.  If I don’t know where I’m going or where I’m headed but if I see any possible future I’m going to play with the idea that if I don’t like it I can change it.  I’ve had dreams and intuitions and visions three centuries into the future of what our world might be like, but I’m not going to sit down and say that’s how it has to be.  I will say that is a possible future I have seen.

The good thing that I’ve seen about our future is the reemergence of a society that values dreaming and intuition and the things that I teach and uses them in healthcare, in making decisions at the level of government and community and has expanded our understanding of what the sources and resources we humans have to draw upon.  It’s time for that. We’ve been blindsided again and again, our leaders have been misguided and misguided us because they haven’t been listening to the voice of conscience that speaks in dreams.

Let’s add this: in dreams we hear the voice of conscience. When those in power lead us astray and steal our money and our jobs, I sometimes think it’s because they’re not listening to that voice of dreams. It’s just the voice of conscience and humanity.  So I dream a future society that will be heed that voice of  conscience, dream with the spirits of nature and connect with the earth, where and we will dream beyond all our divisions and prejudices as one people.

So we’ll have to wait 300 years before your dream of a dreaming society is fulfilled?

I’ll be as open about this as I can, which is somewhat but not fully.  I dreamed into the situation of a woman who lives maybe seven generations beyond me.  My math isn’t good, that might be 300 years, it might only be 200 years.  She is a priestess and a scientist and she belongs to an order of women who are trying to rebuild our world after various catastrophes.  They are using all the arts and sciences of dreaming which we almost lost.

I feel that she exists in a possible future and I feel an obligation to help her and her kind come into existence.  So that’s the nature of my relationship with the future that I want to support, a possible future where people are working with humanity and compassion and a willingness to use the arts of dreaming which have been woefully lacking in our society.

For more on prophetic dreams and dreams of the future in history, please read The Secret History of Dreaming by Robert Moss. Published by New World Library. 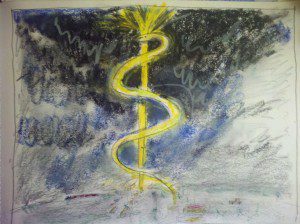