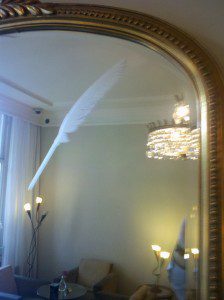 Writing and dreaming are closely related as daily practice. Writers who keep journals and record their dreams are giving themselves a warm-up, flexing the creative muscles that will work on the larger project. Writers who may not record their dreams with any regularity nonetheless rise from sleep with their heads full of words – as Dickens related in a letter to a certain Dr Stone – that are pressing to come out.

A writer’s dream may help to “break up the great fountains of the deep” (a phrase Mark Twain used repeatedly) releasing the power of long-buried memories, or bringing through ideas that have been growing in the preconscious or the deeper unconscious for years or decade. That is how Aslan came to C.S. Lewis, giving him the key to Narnia.

The Lion all began with a picture of a Faun carrying an umbrella and parcels in a snowy wood. The picture had been in my head since I was about sixteen. Then one day, when I was about forty, I said to myself: ‘Let’s try to make a story about it.’

At first I had little idea how the story would go. But then suddenly Aslan came bounding into it. I think I had been having a good many dreams about lions about that time. Apart from that, I don’t know where the Lion came from or why he came. But once he was there He pulled the whole story together, and soon he pulled the six other Narnian stories in after him.

Yeats was inspired by a dream to write his play Cathleen ni Houlihan. As he wrote in 1908:

One night I had a dream almost as distinct as a vision of a cottage where there was well-being and firelight and talk of a marriage, and into the midst of that cottage, there came an old woman in a long cloak. She was Ireland herself, that Cathleen ni Houlihan for whom so many stories have been told and for whose sake so many have gone to their death. I thought if I could write this out as a little play I could make others see my dream as I had seen it.

In dreams and flow states that writers come into contact with inner helpers. Robert Louis Stevenson communed with his “Brownies” in states of reverie, and gave them the credit for doing better than half his literary work. Yeats spoke of the “mingling of minds” that can bring assistance, in a creative venture, from intelligences that seem to belong to other times or other dimensions .Milton described the source of his inspiration as

….my celestial patroness, who deigns
Her nightly visitation unimplored,
And dictates to me slumbering, or inspires
Easy my unpremeditated prose [Paradise Lost IX. 21-4]

Milton spoke of “being milked” after his nights of inspiration, as – totally blind by the time he composed his most famous work – he dictated to a scribe.

When they are truly “on”, many writers experience the sense that they have entered a creative partnership with a larger power, a power the ancients used to call the genius or the eudaimon (the good demon). Some writers develop the ability to enter a certain kind of imaginal space – call it the Dream Library – where such encounters are easy; we do this regularly in my own creative writing retreats.

I am leading a new 5-day adventure in “Writing as a State of Conscious Dreaming” at a beautiful private retreat center near Seattle form April 16-20; details here.

If you can picture your blocks, you can move beyond them
archives most recent
More from Beliefnet and our partners
previous posts