Hollywood versions of the afterlife 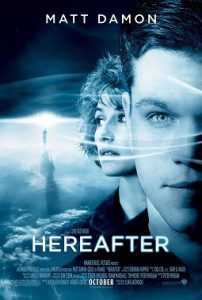 Hollywood has given us some very interesting versions of what may go on after death and how the living and the deceased interact. The recent film Hereafter, directed by Clint Eastwood and starring Matt Damon, explores patterns of connection between living people and those on the Other Side: the gift (or curse) of a natural psychic medium; a twin’s abiding link with the brother who died; the familiarity of a near-death survivor with other realms.

Home base, in Hereafter, is this world rather than the Other Side. Depictions of the afterlife that intrigue me most are those that take us deeper into Otherworld geography, especially those in which the Otherworld is home base. Here are notes on a few of my favorite Hollywood visions of the afterlife in classic movies, and conversation themes they suggest. .

What if the dream angel spoke to you tonight?
archives most recent
More from Beliefnet and our partners
previous posts