Einstein demonstrates the secret of synchronicity 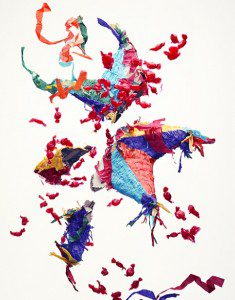 When we go dreaming, we travel through the curtains of our everyday understanding, beyond the walls of our physical reality; we get out there. Through synchronicity, or meaningful coincidence, the powers that live in that deeper reality come probing or poking through the veils, and sometimes this brings us awake to the hidden logic of events and the reality of a world-behind-the-world.

Dreams that have influenced my understanding of these things. In one of the most important, my mentor was Einstein, no less. An Einstein figure has appeared in a number of my dreams, talking in a stage German accent, sometimes at machine-gun speed, about such things as the physics of time travel and the code of the I Ching. I retain a necessary skepticism about whether my dream Einstein could possibly be connected to the great scientist, since I have a hard time wrapping my head around the simplest principles of physics. Whoever my dream Einstein may be, behind the familiar mask, he does have interesting things to reveal and to teach about the nature of multidimensional reality. Here is the dream in which Einstein showed me the secret of synchronicity:

A passage opens, like a long cylinder lined with silver and bronze-colored rods, angling up into the sky. As I speed up through it – shooting up effortlessly – I become aware that I am about to encounter someone who can instruct me on the workings of time and the content of the future. I come out high above the ground and look up at a huge revolving structure, something like a Ferris wheel on its side. At the end of each spoke is a different object, or rather bundle of objects. As the wheel revolves, I notice that the spokes go up and down at all angles, making the general shape of a sphere.
At the hub of the wheel is Einstein. He appears with his wild fluffy hair, in rumpled clothes, as he has appeared in other dreams. From the center, he works an engine that enables him to toss down bundles from the ends of the spokes. As one spoke dips, another rises, producing a seesaw effect. As the bundles fall to earth, Einstein instructs me that this is how the unfolding of events in time actually takes place: not in the serial fashion that is a concession to the limited human mind, but in the releasing of probability bundles, packages of time + energy whose contents will be unfolded over a certain period. The unfolding of events will be influenced by the dropping of subsequent probability bundles.*

I woke from this dream excited, with an aha sense of illumination. While Jung said that synchronicity (a word he coined) is “an acausal connecting principle”, when it happens we often feel that causation is at work on a level that escapes explanation in terms of the push-pull laws of consensual reality. Einstein’s demonstration provides a model of how this may work, raising our imagination to a higher dimension of the multiverse.

I think of Einstein at the wheel of that crazy machine whenever I notice a riff of coincidence. When things keep popping up that you know are connected, though there is no causation involved on the physical plane, couldn’t this be the effect of the firing of one of those probability bundles, flung from another world into this one, to burst across our space and time like multidimensional piñatas? The world “quantum” means “bundle” or “packet”, so this image may be a clue to how quantum effects are manifested on a human scale.

What I like best about the dream image is that the machine that fires the probability bundles closely resembles something you might find in an amusement park, evoking a game greater than the ones we spend most of our lives playing. Heraclitus said that life in time is governed by a child king at play  moving pieces in a game on another level of reality. Maybe the pieces in play are probability bundles.

Secret handshakes from the universe: what made her fall
archives most recent
More from Beliefnet and our partners
previous posts