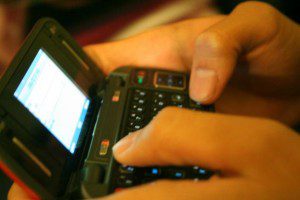 It seems that sleep disorders are keeping pace with technology and modern lifestyle. Text messaging, or “texting”, is a fairly constant activity for many younger people in our society, and it seems that some of them are now doing it in their sleep.

Dr David Cunningham, a sleep researcher in Melbourne, Australia (my native city) reports, ‘We have had patients who have reported sending text messages to their friends and family while asleep.” He adds that this is still a fairly rare phenomenon, “not a common trend.”

When the London Daily Mail ran this story, it immediately triggered some interesting readers’ responses.  From a reader in Wales: “I’ve done this, one time asking ‘how many ostriches were there?’ and the other one was a song about my boyfriend that I was dreaming about, I remember the dream but not the text!”

Dr Cunningham’s advice to sleep texters: leave your cell phone out of reach, preferably outside the bedroom.

A 2008 study by researchers at the University of Toledo, Ohio, quoted the case of a middle-aged woman who regularly sent emails in her sleep, without memory of the contents until recipients told her. Cases of sleep emailing have been reported more frequently than cases of sleep texting, perhaps because research hasn’t focused, until now, on the texting phenomenon. Dr Cunningham observes that sleep emailing may be the riskier activity, since “Emails can be sent to work colleagues and have much more serious consequences, whereas text messages are more likely to be accidentally sent to a friend or family member, so people aren’t as likely to complain of a problem.”

In both cases, we may see a continuation of habitual waking behavior into the sleep state, when the major muscle groups are supposed to shut down so we don’t try to replicate dream activity with our physical bodies.

Meanwhile, our dreams are also up to speed with technology. One dreamer reported to me that her deceased mother phoned her and asked to be put on speed dial. Another of the Daily Mail readers complained that her long work days at the computer extended into her dreams. “I got seriously worried when I reached the stage of having to click on the little red x in the top right-hand corner of my dream in order to wake up.”