Put fish bones in the cuckoo clock & other dream guidance 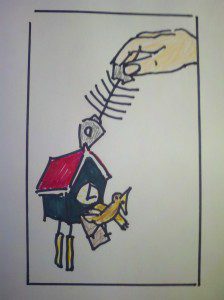 Last night I received a ton of help in bringing my books on Active Dreaming to a wider audience. We launched a new multimedia project and several e-books, I filmed an important documentary, and I still had time to give a speech to a full house at a Rotary meeting. Wonderful what we can pack in to an hour or two of sleep!

The best part was at the Rotary. A group of 80-something ladies, in tea dresses and flowered hats, were most enthusiastic about my presentation and urged me to join them for refreshments. A tiny old lady with a mischievous glint in her eye wagged a finger. She wanted to give me her surefire recipe for success. “Put fish bones in the cuckoo clocks.”

“But I don’t have cuckoo clock,” I said, mystified.

I woke feeling amused but still mystified. Put fish bones in cuckoo clocks? Was this some kind of little-old-world-lady voodoo? More likely, it was an over-literal translation of a colloquial expression from another language. But what language? I had the impression the little old lady was from Eastern Europe, but that is a vast region of many languages and folk traditions.

When I get funny phrases or mystery words in my dreams, in any language, I like to stay with them. They sometimes prove to be clues to very interesting material, even keys to treasure boxes. I did not get far when I consulted Auntie Google, entering “fish bones” and “cuckoo clock” in the search box at the same time. I recalled scenes from boyhood: of calling a person or an idea “cuckoo”, meaning crazy, of someone who nearly died when a fish bone got stuck in his throat. More thoughts of Hungarian hexes and Volga voodoo. But I really did not think this was what the sweet octogenarian in the tea dress had in mind.

Over to Facebook. I posted the key snippet from the dream, with the silly drawing above. Within minutes, this brought fascinating feedback from a friend in Turkey. Simin reported that in Turkish, “to throw or put in fish bones” means “to distract people from a situation which they feel okay with, to make them feel that there is something they have to change.”  I can see that getting people out of their comfort zone and shifting them away from conventional thinking could indeed be a key to success, especially when you are offering keys to another world. My little old lady seemed to be from eastern Europe, but quite a few Turkish expressions turn up in the languages of that region, as I found in Romania, so my Turkish friend on Facebook may have supplied the exact context for understanding the first part of that funny phrase. I am curious to see what more will turn up.  A folk ritual, perhaps. Oh yes, and I’ll be working on bringing through all the other good developments from the dream world into the one where my fingers are typing this. 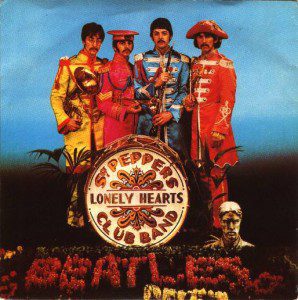 Sex with Sgt. Pepper and other dream entertainments
archives most recent
More from Beliefnet and our partners
previous posts