Dreaming the Song of the Lord 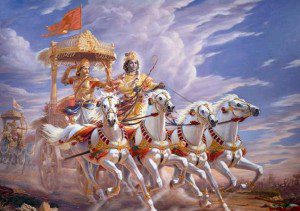 “Action is better than inaction” – Krishna to Arjuna.

Dreams can call us to traditions and cultures of which we may have had little or no previous knowledge, from any obvious sources, yet may now prove to be part of our authentic path. In one of my online forums, a woman named Maureen described how she was guided deep into Indian philosophy by a fascinating recent series of dreams. The sequence began with a dream encounter with a charming Indian man who wanted to escort her on a trip.

When Maureen asked for specific guidance on her spiritual path, she dreamed she was given two books, one a book for children, the other the Bhagavad Gita. She then joined her sisters – they all used to be champion gymnasts – and they performed in something as important as the Olympics. In company with her sisters, she discovered a “book” composed of five panels. Examined a certain way, the five panels revealed an unusual and highly significant map, drawn in “India ink”, that only she could see. She communicated the map to her sisters by singing its meaning.

Now: the dreamer had never previously read the Gita. She did not know that it is a “song” (the title means “Song of the Lord” and it is traditionally sung in recitation). She knew next to nothing about Indian philosophy. She certainly did not know that the Greeks in the army of Alexander the Great who encountered yogis called them “gymnosophists” (a word related to “gymnasts” that means “naked philosophers”) because these ascetics wore rather little clothing.

Inspired by her dream, Maureen proceeded to read the Bhagavad Gita. She reported: “I feel as if I am holding a jewel in my hands with this book. I have never been to India, and have no close associations with it – but now it has really grabbed my attention. I feel I am being guided on a question I always wrestle with – how do we live a truly spiritual life in our earthly existence?”

She felt the gymnasts in her dream had a dual meaning, related to that question. “The lesson I learned from my father about embracing gymnastics not to compete, but to give myself to the sport, to let it be an expression of me, was very liberating for me at the time, and life altering.” As she studied the Gita, she realized that the “five panels” that composed her dream map may relate to the five “immutable truths” and five “causes of action” that Krishna explains to Arjuna.
She is finding the Yoga Karma (the yoga of Action) in this work highly relevant to her need to make a balance between the practical necessities of life and a spiritual awakening. “Action is better than inaction,” Krishna admonishes Arjuna, on the field of battle. (But think not on the fruits of action…)

Maureen’s experience is a rich example of how dreaming can guide us in keeping body and soul together as we try to marry a spiritual awakening to the requirements of ordinary life. Hmmm, and now I’m remembering that in a dream of my own, a year before hers, I told reporters that I was writing an epic inspired by the Mahabharata – the immense Hindu cycle in which the Bhagavad Gita is the central jewel. That would be quite an assignment! 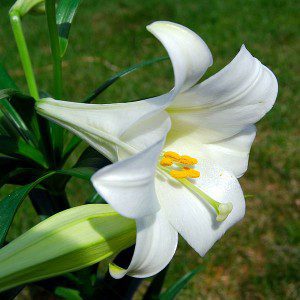