How to stop dreaming dead men’s dreams I 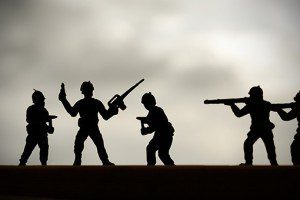 It’s starting again. She is in the jungle, and it steams and stinks. She sees Asian men in rags through the green tangle, and knows they will kill her if they can. Overhead, the whir of choppers beats the air, coming lower and lower. The world around her explodes into mud and blood. As she throws herself to the ground, she sees the head of the stubbly man next to her explode like a tomato, spattering her face and skin.

She wakes sobbing and terrified. Why is she thrown into these horror stories, again and again? It began, she says, when she was four years old, living with her family in a ranch house in the Southwest. There are still nights she’s afraid to sleep for fear that the dreams will take her back to the place of rank terror. “So many dead men. So many bodies.”

The horror has spilled over into her waking life. She still can’t hear the sound of a helicopter without wanting to flatten herself on the ground, or duck under a table. Even the sound of air conditioner can make her panic.

During a break in my workshop, Cara asks, “What do you do when your dreams are so terrible?”

I sat what I have long believed. “When we are scared by something in a dream, we want to brave up and face what we fear on its own ground.  I would want to try to find the strength and resources to reenter one of those dreams, go beyond the fear, and do whatever needs to be done. The time for that might be today.”

Cara considers this. The members of our circle have bonded deeply and developed the group energy, compassion and humor that make the extraordinary easy. I have already announced that after the pause, we will break out into smaller groups to practice one of the core techniques of Active Dreaming: dream reentry and tracking. In each group, one person will offer a dream as a doorway into a different space, somewhere in the dreamworlds, where all the members of the group will proceed to travel together with the aid of shamanic drumming.

Once you’ve had the experience of journeying with companions, wide-awake and conscious, into another reality where you share deep experiences and from which you can bring back gifts and mutually confirming information, it shifts your definition of what is real. It is remarkably easy to do, once the group energy has been raised, the right doorways chosen, and clear intentions and travel itineraries agreed – with the help of sonic driving supplied by a simple frame drum.

I volunteer to join Cara’s group. She agrees she will try to go back into one of those scenes of green hell that have shadowed her life for nearly four decades. We sit with her as family, listening to the awful details of a dream in which she is trying to hunker down in a muddy ditch, while blood and body parts are exploding around her. Again, she describes the sound of the whirring chopper blades.

Vietnam. I feel sure of it. I was in Vietnam, in the last years of the war, as a correspondent. I ask Cara to feel around inside the dream and tell us, “Whose body are you in?”

“I’m not myself,” she responds, with sudden certainty. “I’m in the body of a young guy with freckled skin. God, he’s so young.”

I am quite sure, in this moment, that these terrible dreams no more belong to her than a date rape drug slipped into an innocent co-ed‘s drink.. The Vietnam dreams are those of men who fought in that wretched war and are haunted by its ghosts. Is it possible that they are actually the dreams of ghosts, of soldiers who died in the jungle or the paddy fields? That would mean that ghost soldiers of Vietnam have been with Cara since she was four years old, and stayed with her for forty years.

How did this come about? Cara was born in 1969, and obviously had no direct involvement with the war. There must be a link. I ask if an adult member of her family, or a family friend, served in Vietnam. She shakes her head. “Not that I know. Dad was in the National Guard. Grandpa was in World War II.”

I remain certain that there must be a physical link, a bridge across which the ghost soldiers traveled into the bedroom of a little girl in Arizona. I realize that our assignment is not to go back inside scenes of horror and trauma that are not from Cara’s life, but to find out why these memories, and those who carried them, invaded her nights.