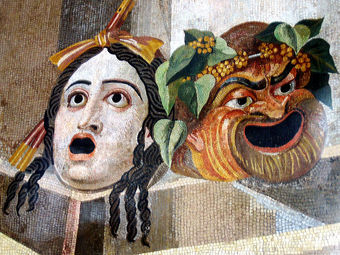 I am in the body of an older woman. She’s smart, well-educated and funny and unconcerned about appearances. Her skin is heavily wrinkled but she doesn’t bother much with makeup. She’s wearing a skirt but it’s of heavy fabric, paired with sturdy hiking boots. She’s dressed like an anthropologist of an earlier generation, which may be exactly what she is.

I’m intrigued to be inside her body and situation. She is exploring life among the people of a high rocky plateau in South America. An elegant, elderly scholar, dapper in a linen suit, offers to escort her to the Indian market. I feel her surprise and pleasure as this slight dandified don comes onto her. Can he be serious? It seems that he is. He really wants to take her to bed. I’m intrigued to experience warm sensations of arousal inside the woman’s body, and then to enter her thought processes as she makes very practical calculations about what it would take to get the old man ready for sex and sustain his interest.
I woke intrigued and delighted by this dream. In my work and in my personal life, I am surrounded by women and often need to imagine myself inside a woman’s body and situation in order to help with a dream or a need for healing. However, I don’t recall a previous dream in which I have been right inside a woman’s body in such a realistic way. And when I think of “past lives” that feel intimately relevant to my present life, they are typically the lives of men, most often men of power (who may have bequeathed some karmic burdens!)
In the workshop on exploring the multidimensional self that I led last weekend, I made it my intention during one of the group journeys to explore my connection with female personalities in other times and cultures, and made some important discoveries. This may have laid a foundation for what happened spontaneously in my dreams last night.
In cross-gender dreams, in which we seem to be in the body and life situation of a person of the opposite sex, we may be getting in touch with our female or male side. Yet such dreams may also be transpersonal. The episode I reported from last night was part of a complex and highly realistic adventure in which, inter alia, I was helping the people of that plateau to set up an agricultural cooperative, and interviewing a woman geologist on the unusual rock formations, and investigating the diseases and use of hallucinogens by the indigenous population. It does not feel like the drama and the body-swapping were confined to the basements of my personal subconscious; it feels like I was there and that my dream self entered and used the woman anthropologist’s body for significant reasons, which may have included expanding my own understanding of women and humanity.
The dream prompts me to make a closer study of cross-gender dreams, and I’ll welcome any reports that you wish to share of your own adventures in the guise of a person of the opposite sex. As always, we want to assemble as much data as we can and study the specifics closely before making general statements about what is going on in this category of dream experience. I’ll think more on the right term for this category. I was going to use “transsexual dreams” but when I googled that the first entry that came up was a plug for an escort service! And I rather like the fact that “cross-gender” is used for actors on stage. Our dreams, like our world, are a stage where we may play many roles.
Theatrical masks from Hadrian’s villa. In ancient Greek theater, as in Shakespeare’s time, men and boys played women on stage,
read next post