Darkness, But Then The Hope of the Resurrection 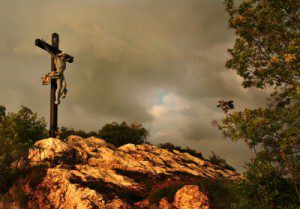 Last week, we heard about a co-pilot purposely taking down a plane with 150 people on board. In a moment, lives were lost.

One moment, a passenger was laughing with a fellow travel and the next, he was diving straight into the side of a mountain. Another was cuddling her child, then screams brought recognition of impending doom.

In a strange way, the tragedy focused my thoughts on this Holy Week. From palm branches waiving, people shouting, “ Hosanna” during the triumphal entry of Jesus into Jerusalem, to the night Jesus was betrayed and later hung on the cross, much changed for His followers. Elation gave way to despair. The Christ suffered and was put to death. What must the witnesses thought?

Did they give in to momentary despair like the people in the airline must have done? Or did they try to remain optimistic, recalling the prophetic words of Christ and the Scriptures? In the natural, all appeared to be lost. The cup of suffering was not removed.

Philip Yancey, in his book, The Jesus I Never Knew, points out that when Christ gave breath to his last words, “My God, My God, Why have you forsaken me?” He used the word, “God” instead of “Abba” or “Father”. Christ felt abandoned from the Father during His darkest hour.

When tragedy strikes, that same sense of momentary abandonment is felt. But in the spiritual realm, the darkness of Good Friday eventually gives way to the light of Easter morning. Yancey says, Easter holds out the promise of reversibility. Destruction and even death can be reversed because of what Christ accomplished on the Cross. Easter is the starting point. It is a preview of an ultimate reality. Our present lives are the contradiction of what is to come.

So as the families of the German flight passengers try to make sense of senseless tragedy, and the rest of us struggle through our emotional “wreckage ”, Easter brings hope. If God could do what He did on Easter, then what more does He have for us eternally? Easter is a glimpse of eternity.

Yancey points out that the physical scars Christ suffered remained on His transformed body as a reminder that painful memories may never completely go away, but the hurt of those scars eventually will.  As we rebuild our lives from devastating times, remember that Holy Week reminds us that someday, we all get a new start. Tears will be gone. Suffering will be no more.

And that is the hope of the Resurrection.

Are Regrets Holding You Back?

Frank Sinatra’s mega-hit song, My Way, has a line about regrets. “Regrets, I’ve had a few, but then again, too few too mention.” We should all be so fortunate! And by the way, doing it my way versus God’s way, not the path I choose. Sorry Frank! Now, about regrets, we do have a […]

Happiness! We all want it!  But how do you get it? Over the past decade, numerous articles have been written on what makes people happy. We want answers to achieving this desired emotional state. How should we prioritize our lives to achieve happiness? A Harvard study found an answer. But the study doesn’t go far […]

In this broken world in which we live, bad things happen that are out of our control. While we don’t like to think about loss, we do need to know how to cope with it when it happens. In the past few weeks, I know several people who experienced sudden loss. Loved ones who died unexpectedly, […]

Would you mind helping with the dishes?  I will in a minute. I am doing them now, can you please come help now?  I will get to it later, don’t worry!  Procrastination can be frustrating to those who like to get things done. Maybe this is your struggle. You know this is a problem, but […]