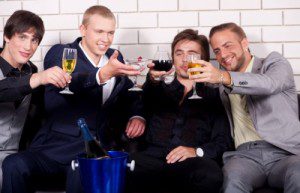 In the throws of January, college students begin dreaming about Spring Break. Those plans often include partying on a beach with nonstop drinking.

Binge drinking is “a pattern of drinking that brings blood alcohol concentration (BAC) levels to 0.08 g/dL. This typically occurs after 4 drinks for women and 5 drinks for men—in about 2 hours” (NIAAA).

The Substance Abuse and Mental Health Services Administration (SAMHSA) defines binge drinking as drinking 5 or more alcoholic drinks on the same occasion on at least 1 day in the past 30 days. NIH estimates that four out of five college students drink. Out of those who drink, about half binge drink. And events like Spring Break, frat parties and sporting events bring out the partying.

The problem is that this type of drinking is often normalized–just plain fun! But today 6 people will die of alcohol poisoning.

The Centers for Disease Control (CDC) reports that every day, six persons, mostly men, die in the United States due to alcohol poisoning related to binge drinking. The macho, “I can drink you under the table,” attitude could end someone’s life.

Furthermore, Spring Break, partying through the night and weekend drinking binges land young adults in the emergency rooms of too many hospitals. Because of the glamour and general acceptance of underage drinking in college, coeds are not thinking that alcohol in high doses can lead to poisoning.

A high blood alcohol content impacts major areas of the brain associated with respiration, heart beat and temperature control. When someone has too high a blood alcohol content, breathing becomes difficult, your heart rate slows, and the body becomes clammy. The brain dulls, vomiting can occur causing a person to choke, seizures may occur as well as unconsciousness which can lead to death.

So of you are a college student or anyone who thinks that partying like a rock star is just plain fun, think again and be responsible. It could save your life!

Does the Cold Make You Catch a Cold?
archives most recent
More from Beliefnet and our partners
previous posts

In this broken world in which we live, bad things happen that are out of our control. While we don’t like to think about loss, we do need to know how to cope with it when it happens. In the past few weeks, I know several people who experienced sudden loss. Loved ones who died unexpectedly, […]

Would you mind helping with the dishes?  I will in a minute. I am doing them now, can you please come help now?  I will get to it later, don’t worry!  Procrastination can be frustrating to those who like to get things done. Maybe this is your struggle. You know this is a problem, but […]

Everybody Lies Once in Awhile, Don't They?

Have you ever done something 99%? Well, some people feel telling the truth 99% of the time is good enough. It’s OK to tell a little white lie here and there. But is it? If you drank milk that was 99% milk but 1% vinegar, would it be OK? This idea that little white lies […]

MLK: Are We Honoring the Legacy of Nonviolence and Love?

As we remember the legacy of Martin Luther King, Jr., I couldn’t help think about the importance nonviolence played in his approach to racism. He is certainly remembered for his promotion of non-violence during protests. And he advocated love over hate. In his first book, Stride Toward freedom, he advocated nonviolent resistance with the idea that […]