The Wisconsin woman who saw Mary

Who is Adele Brise, the visionary who is responsible for the first approved Marian apparition  in the United States?

The Compass has the answer:

Adele Joseph Brise’s story began when she arrived from Belgium with her parents, Lambert and Marie Catherine Brise, two sisters and a brother in 1855. They bought a farm at Red River, near the border of Brown and Kewaunee counties. 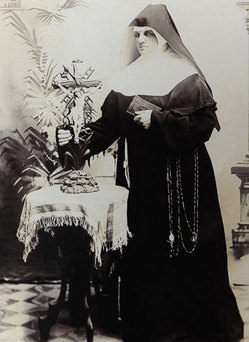 Adele had her first of three apparitions while carrying grain to a mill near Dyckesville on Oct. 9, 1859. On the following Sunday, while walking to Mass in Bay Settlement, the Blessed Mother appeared again. During the third vision, while returning home from church, Adele said Mary identified herself as “the Queen of Heaven” and told her, “Gather the children in this wild country and teach them what they should know for salvation. Teach them their catechism, how to sign themselves with the sign of the cross and how to approach the sacraments. That is what I wish you to do. Go and I will help you.”

So the 28-year-old gathered the children and taught them about the faith. She would travel to farms, sometimes 50 miles away, to teach them. While Adele was never a vowed religious, she gathered a lay community around her, known as the Sisters of Good Help. Adele, called Sr. Adele, became their leader.

It wasn’t until 1867 or 1868 that the first school was built on the chapel site. St. Mary’s Academy, a boarding school, had 95 students enrolled by the 1871-72 school year. Sr. Adele supported the school by relying on God and the generosity of those she met. She sometimes went begging for what she needed.

One of Sr. Adele’s students was 6-year-old Odile Allard, who arrived at St. Mary’s Academy with her baby sister after their mother died. Odile, (later Sr. Marie du Sacré Coeur) stayed until she was 15. “I don’t remember that there were less than a hundred children, the year around at the Chapel, mostly orphans,” she wrote in a letter to the sisters at Bay Settlement.

The first shrine chapel was built by Adele’s father. It measured 10 feet by 12 feet and was located near the spot where Mary appeared to Adele. A larger chapel was built in 1865. The present chapel was completed in 1942. The altar in its crypt stands over the site of the reported visions. Logs from the trees between which Adele said Mary appeared can be seen in a display case in the shrine’s gift shop.

Fr. John Doerfler, vicar general and diocesan chancellor, is rector at the shrine.

“What is really remarkable about Adele,” he said, “is that her life had a real focus to pass on the faith to the children. She gave her whole life to this. And she was a simple, yet strong and dedicated, woman of faith. It was not an easy life. Yet she lived this life with joy, with humility, with abandonment to God’s providence and reliance on the intercession of the Blessed Mother.”

Bishop David Ricken, who said he was “thrilled” to learn that the diocese had a shrine dedicated to the Blessed Mother, echoed Fr. Doerfler’s sentiments.

“What has stuck me about the story of the life of Adele Brise is her lifelong fidelity to what the Blessed Mother asked her to do with her life,” he told The Compass in 2009. “She dedicated her life to prayer, especially for the conversion of sinners, and to the catechesis of children. She made great sacrifices and attracted other young women to follow her in her fidelity to the Blessed Mother’s call.”

There’s much more, along with pictures. Check it out. 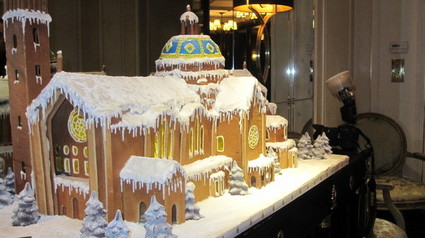 Incredible edible: a gingerbread house of God
archives most recent
More from Beliefnet and our partners
previous posts