Don’t pack your bags yet, but some biblically-minded entrepreneurs are planning a Noah-themed tourist attraction:

The same group behind the Creation Museum is partnering with another group to build a full-scale version of Noah’s Ark that will anchor a family oriented Bible-theme attraction costing an estimated $150 million. 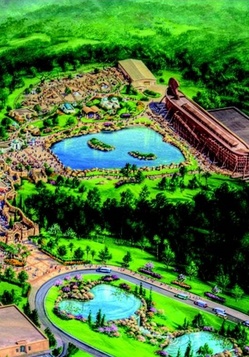 The “Ark Encounter” is scheduled to be completed in spring 2014 and will be built in northern Kentucky at a site to be determined, according to a news release. The Creation Museum — which by comparison cost $27 million — also is located in northern Kentucky in Petersburg, near Cincinnati.

The Ark Encounter also will include live animal shows, an aviary, a replica of the Tower of Babel with exhibits, a children’s interactive play area, a 500-seat 5-D special effects theater, a lookalike first-century Middle Eastern village and a “Walled City much like was found in ancient times,” the release said.

Answers in Genesis — the Christian ministry that built the Creation Museum — is partnering with a group called Ark Encounter LLC to build the Ark complex. It will be privately funded and will employ up to 900 people either full or part time.

“We are very pleased to be a part of this new project,” Ken Ham, president and founder of Answers in Genesis and the Creation Museum, said in a statement. “AiG has been blessed to see the Creation Museum host over one million guests in three years. Based on our experience and success operating the large, state-of-the-art Creation Museum, our board believes the time is right to partner with the Ark Encounter in building a full-scale Noah’s Ark. We hope that this fun and educational complex called the Ark Encounter will become another popular tourist destination for the state.”

“We are excited to join with the Ark Encounter group as it seeks to provide this unique, family friendly tourist attraction to the Commonwealth,” Beshear said in a statement. “Bringing new jobs to Kentucky is my top priority, and with the estimated 900 jobs this project will create, I am happy about the economic impact this project will have on the Northern Kentucky region.”