25,000 turn out for early Guadalupe celebration in LA 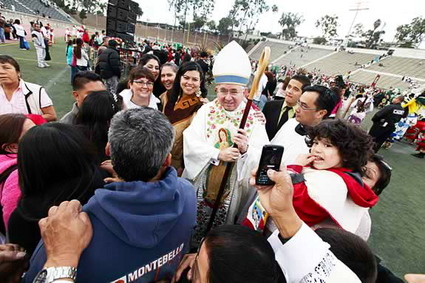 It happened last weekend, and The Tidings has the scoop:

Despite threatening skies, groups of parishioners, students and religious had already arrived by 8:30 a.m. at the corner of Ford Street and Cesar Chavez Avenue in East Los Angeles, to show their love for the Virgin of Guadalupe.

Indigenous dancers from Riverside County and throughout L.A. County joined equestrian groups, decorated floats and mariachi, who escorted the “Peregrina” (migratory) image and the Guadalupe Torch.

All were united to thank the Virgin for her miracles. María Sánchez, a Salvadoran single mother of four, is “forever thankful” to the Virgin for interceding so that her 12-year-old twin son Steven did not have to suffer an eighth brain surgery to treat cerebral palsy and epilepsy; 56-year-old Juventino Solorio, attending from Our Lady of Solitude for the last 15 years, is in remission after undergoing treatment for colon and lung cancers within the last seven years; and popular regional Mexican singer Beatriz Adriana shared with thousands gathered at the college stadium how the Virgin helped her heal from the pain of losing her son and forgive his kidnappers and murderers.

There were also those who showed up simply to praise the Virgin and to learn first-hand about Mexican culture and traditions, including confirmation students from St. Louise de Marillac Church in Covina, and the group of Resurrection School students from East L.A.

“I invite you to be the Juan Diegos of the third millennium,” said Msgr. Diego Monroy, rector of the Basilica of Guadalupe in Mexico City, as he was shown on a jumbo screen.

“We all desire an immigration reform,” he said. “We are all children of God and we should never reject, humiliate or violate the rights of others, especially of our migrants.”

The celebration offered, for many, an introduction to Archbishop Gomez, main celebrant, who was joined by Auxiliary Bishops Oscar Solis, Alexander Salazar and Gerald Wilkerson and priests from the archdiocese. Cardinal Roger Mahony, who will retire next year, was in Stockton participating in that diocesan celebration (see below), but he was thanked by the multitude with loud applause, for supporting and participating in the celebration during the last 25 years.

“Although we are physically away from the Cerrito del Tepeyac (Hill of Tepeyac, where the image of the Virgin miraculously appeared on the cloak of the indigenous peasant Juan Diego), from here we unite with millions throughout the continent in their faith and love for the Virgin of Guadalupe,” Archbishop Gomez told the more than 25,000 people during his homily.