The rite stuff: “Why am I driving 20 minutes to go to a fake wedding?” 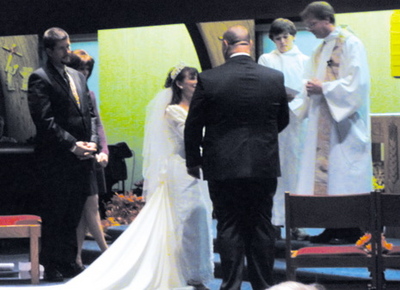 Seminarians spend part of their formation practicing just how to do the sacraments — everything from consecrating the eucharist to reconciliation. Recently, Long Island Catholic dropped in on one unusual rehearsal that actually involved a large number of parishioners:

It looked just like a wedding — a beaming bride and groom exchanged vows before a presider and a church full of family and friends at Our Lady of Lourdes here Nov. 11. But the “priest” was seminarian John Sureau and the people in the church were his fellow parishioners, who came out to help him practice celebrating the sacrament as part of his studies to become a priest.

At the Seminary of the Immaculate Conception in Huntington, where Sureau is studying, in addition to their spiritual formation all seminarians also pursue practical formation for their priestly duties. “In the class that I’m in, a liturgical theology and practice class, it requires us to actually practice the different sacraments so we can hopefully not be too much of a disaster and have a little bit of a sense of what to do,” Sureau explained to the many parishioners who turned out to help him that night, volunteering to act as the bride and groom, members of the wedding party, lectors, altar servers, and members of the congregation. “We have to make a DVD, everybody watches it in the class — which is very humbling — and then we get graded and evaluated on it.”

“This type of learning experience is important for the seminarians because being an effective presider at the Church’s sacramental celebrations is an essential part of a priest’s ministry,” explained Msgr. Joseph DeGrocco, professor of liturgy and director of liturgical formation at Immaculate Conception Seminary. “A priest must know not only the ritual itself — what to do, when to do it, how to do it, and what to say — but he must also effectively interact with his environment. On top of all that, he must function in a way that is inviting and engaging, such that all the people are drawn into the mystery of the liturgical action. That’s a tall order for a priest to fulfill. That’s why actual practice in situations that come as close to real as possible is so important. I don’t expect the seminarians to master all this by the time they are ordained, but at least their sacramental practice courses give them a solid beginning in practicing what it takes to grow into being a truly effective presider of the Church’s sacred rituals.”

Jean Ann Gottsch, who served as a lector at the mock wedding, said she has known Sureau “since he was the head of the liturgical committee,” and didn’t hesitate when he asked her to participate. “He’s very well-liked.”

She noted she wasn’t surprised by how many parishioners showed up for the wedding. “Tonight I asked myself, ‘Why am I driving 20 minutes to go to a fake wedding?’ And it’s because of John and this church. It’s truly a community of people as opposed to just going to church.”

We didn’t do anything nearly as intensive in diaconate formation — but each of us did have to “baptize” a plastic doll and “marry” two guys in class — which was, frankly, hilarious.

Starting a new year, moving the ribbons
archives most recent
More from Beliefnet and our partners
previous posts