So, how do you become an exorcist, anyway?

Meet a man who knows — and whose story is about to become a major motion picture, starring Anthony Hopkins: 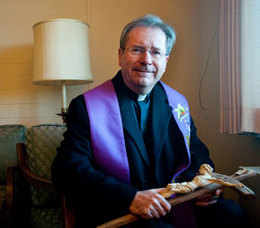 Rare is the priest in the United States who holds the title of diocesan exorcist.

Rarer still is the priest who is the focus of a book on his training as an exorcist, not to mention that the book has inspired the making of a feature film called “The Rite” – starring Anthony Hopkins, no less.

But that’s all become part of the life of Father Gary Thomas, a priest of the Diocese of San Jose, Calif., who is pastor of Sacred Heart Church in Saratoga, Calif.

When some of his fellow priests were discussing that another priest had declined an offer from the bishop to serve as diocesan exorcist, he thought to himself, “I could do that.”

Not that it was easy, Father Thomas said. For one thing, he could find no U.S.-based course of study for priests to be trained as exorcists. He wound up taking a three-and-a-half-month sabbatical to go the Rome seminary of the Legionnaires of Christ and get training from a priest based there.

His experiences are recounted in the 2009 book “The Rite: The Making of a Modern Exorcist” by Matt Baglio.

But Hollywood being Hollywood, when reality isn’t good enough for the big screen, it invents a new reality. “In the movie, I don’t start out as a priest. I start out as a seminarian who has a faith crisis,” Father Thomas said in an Oct. 18 telephone interview with Catholic News Service. “I am ordained eventually before the end of the movie. In the book, already I’m already a priest and I’m not having a faith crisis.”

Hopkins plays a priest-mentor to the seminarian, who anchors the story.

With no U.S. training available, Father Thomas studied three days a week during his sabbatical. “Partially, I made up my own curriculum,” he said. “There’s no cookbook for this stuff.”

A priest for 27 years, Father Thomas has been San Jose’s exorcist for the past four years. In that time, he said, he has conducted exorcisms on five people.

The results, he acknowledged, are mixed.

Read on to find out why.

read next post
Help wanted: no pay, great benefits
archives most recent
More from Beliefnet and our partners
previous posts