That would be Philip Johnson, a seminarian from Raleigh, North Carolina, whose battle with brain cancer has sparked headlines:

The Most Reverend Michael F. Burbidge is requesting prayers for one of our seminarians, Philip Johnson. Philip just completed his first year of Pre-Theology at St. Charles Borromeo Seminary in Philadelphia. A graduate of the U.S. Naval Academy, Philip served two years in the Navy, having been granted a discharge in 2009 when he was diagnosed with an inoperable brain tumor. 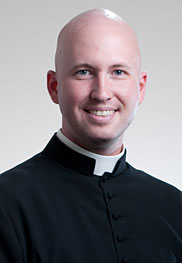 Prior to this diagnosis, Philip believed God was calling him to the Priesthood. “I discussed the possibility of entering the Diocese of Raleigh’s formation program with Bishop Burbidge in 2006 before I went on active duty to fulfill my five year commitment,” he said. But the Navy informed him that was not possible. “So, my plan was to complete my tour of duty and then apply to the Diocesan formation program.”

In October 2008, while serving on a ship near Bahrain, Philip began developing problems. His roommate, who was a Catholic chaplain, noticed a seizure Philip experienced during his sleep. As a result, he underwent an MRI, which revealed a mass developing in his brain.

“I know many people would get mad at God receiving this kind of news,” Philip said. “I didn’t get mad. I got sad. I went to a small Catholic chapel on the naval base in Bahrain and cried, unsure of what the future held.”

The Navy assigned him to Norfolk to undergo further medical tests. In January 2009, a biopsy was performed, the results of which indicated cancer. That meant an automatic medical discharge from the Navy, which occurred several months later.

Philip met again with Bishop Burbidge, sharing with him the status of his illness. He noted that doctors, while acknowledging the seriousness of his illness, could not give a definitive prognosis and that his age was in his favor. “Bishop Burbidge told me he would not get in God’s way if I wanted to answer the call to Priesthood,” Philip said.

In April 2009, he began undergoing radiation for the tumor and chemotherapy.

Having been given the assurance by Philip’s physicians that he could participate fully in the seminary formation program without any detrimental effects to his health, Bishop Burbidge accepted him into formation for the Priesthood, and he entered St. Charles Borromeo Seminary in August 2009.

Read more at the link. Meantime, the bishop has requested a novena for the young man. Read all about it here. And do keep this courageous young man in your prayers.

UPDATE: A reader alerts me to a blog that Philip has been keeping: check it out.

read next post
Heeeeere's Jesus!
archives most recent
More from Beliefnet and our partners
previous posts