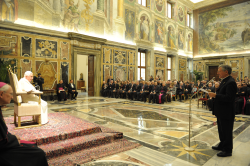 On Friday Pope Benedict XVI urged Catholic journalists to “courageously serve the truth, presenting the reasons for faith beyond ideological visions”. He was speaking to a group of editors and reporters from the Italian Federation Catholic Weeklies.

In his comments he said “The unique function of Catholic newspapers” is to “proclaim the Good News” by reporting the concrete facts and real situations that Christian communities experience”. “As a small amount of yeast, mixed with flour, leavens all dough – he continued – so the Church, present in society, helps grow and mature, what is true, good and beautiful, and you have the task to account for this presence, which promotes and strengthens what is authentically human, and gives modern man a message of Christ’s hope and truth”.

You are called to “serve the truth with courage – he added – to help the public to look and see reality from a Gospel perspective. We have to present the reasons for faith, which, as such, are beyond all ideological visions and have full citizenship rights in public debate. This need inspires your continued efforts to give voice to a perspective that reflects Catholic thought in all ethical and social questions”.

“Continue to be newspapers for the people, that seek to promote a genuine dialogue between the various components of society, to be schools for comparison and fair debate between different opinions. In so doing, Catholic newspapers, while fulfilling the important task of informing the public, at the same time, fulfil an irreplaceable educational function, promoting an evangelical intelligence of the complex reality, as well as critical conscience and Christian education”. 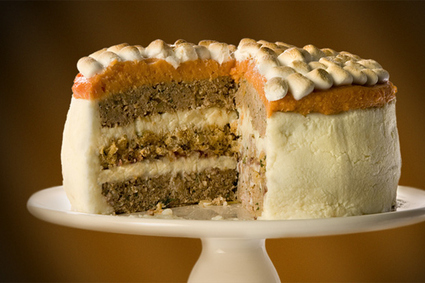 Thanksgiving dinner...in a cake?
archives most recent
More from Beliefnet and our partners
previous posts