Pope: “I am not opposed in principle to Communion in the hand…” 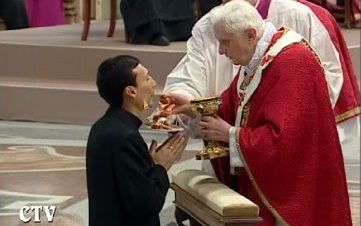 Another nugget from the new book of interviews with Benedict:

Pope Benedict has said in a new book that he is not opposed to the practice of receiving Communion in the hand. However he goes on to explain that he wants to encourage the reception of Communion on the tongue, kneeling, out of respect for the Real Presence in the Sacrament.

In a long interview with German journalist Peter Seewald, which is being published in a new book: ‘Light of the World’, out this Tuesday, the Holy Father says: “I am not opposed in principle to Communion in the hand; I have both administered and received Communion in this way myself.”

But, he explains: “The idea behind my current practice of having people kneel to receive Communion on the tongue was to send a signal and to underscore the Real Presence with an exclamation point. One important reason is that there is a great danger of superficiality precisely in the kinds of Mass events we hold at Saint Peter’s, both in the Basilica and in the Square. I have heard of people who, after receiving Communion, stick the Host in their wallet to take home as a kind of souvenir.

“In this context, where people think that everyone is just automatically supposed to receive Communion — everyone else is going up, so I will, too–I wanted to send a clear signal. I wanted it to be clear: Something quite special is going on here! He is here, the One before whom we fall on our knees! Pay attention!

read next post
As expected, here's the "clarification" ...
archives most recent
More from Beliefnet and our partners
previous posts