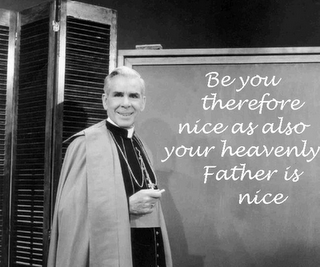 “Shocker” is how Rocco tweeted it, and that about sums it up:

Nearly a year after Fulton Sheen was celebrated anew across the globe on the 30th anniversary of his death, the iconic prelate’s boyhood diocese has suddenly pulled out of leading the charge for his beatification.

In a release posted to its website late last week, the Peoria-based Archbishop Sheen Cause announced the surprise move thus:

It is with great sadness and disappointment, Bishop [Daniel] Jenky announces that after nine years of effort and sacrifice, the Diocese of Peoria is suspending its efforts on behalf of the Beatification of Fulton J. Sheen. The Archdiocese of New York has made it clear that it is not likely that they will ever transfer the remains of Fulton J. Sheen to his home diocese of Peoria. The Bishop hopes that the Archdiocese of New York, in whose Cathedral crypt the earthly remains of the Servant of God are still entombed, might now assume this responsibility. In this endeavor he would pledge the cooperation of his diocese. The bishop urges the clergy, faithful and religious of Peoria to continue to pray for the Cause of Archbishop Sheen whose heroic virtues in announcing the Gospel and serving the poor were an extraordinary blessing in the life of the Catholic Church. The bishop would also like to remind all in his diocese and all those throughout the world who have so enthusiastically supported the Sheen Cause that finally it is only God who makes saints, not men.

The Diocese of Peoria remains committed to promote the message of the great priest, Fulton J. Sheen within our Diocese and to continue to develop our museum and research center devoted to his life.

Check out the rest here.

read next post
It happened 35 years ago today: the wreck of the Edmund Fitzgerald
archives most recent
More from Beliefnet and our partners
previous posts