The City of Churches will soon have fewer of them.

From the In My Backyard Desk, another sign of the times: 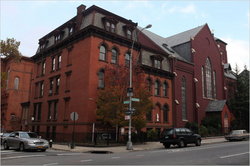 Facing a drop in attendance and a shortage of priests, the Roman Catholic Diocese of Brooklyn plans to close two churches, fold six parishes into three and impose strict budget constraints on all 198 of its parishes.

The move, announced from pulpits on Sunday, was described by church officials as the first phase of a broad consolidation that will result in further closings or mergers over the next two years, eventually affecting every parish in the diocese, which serves an estimated 1.5 million Catholics in Brooklyn and Queens.

Coming on the heels of the largest school reorganization in the history of the neighboring Archdiocese of New York, which announced provisional plans last week to close 31 parochial schools and one high school, the Brooklyn announcement underscored a sense of urgency in the church hierarchy about the financial impact of long-term population shifts, changing religious routines, aging church properties and a shrinking work force of priests.

“Given the financial constraints we now face, the diocese can no longer provide any financial assistance to your parish or any other parish in the diocese,” Bishop Nicholas A. DiMarzio said in a letter read Sunday to parishioners at the churches that will be the first to close or merge, all of them in Brooklyn. “Further, the growing shortage of priests available for parochial service must be considered in all our strategic planning decisions.”

This round of closings and mergers, to take effect on Jan. 31, follows a half-dozen other waves of parish and parochial school closings in recent years in the Brooklyn diocese. Among other cutbacks, the diocese has shuttered nearly half its elementary schools since the late 1990s.

Msgr. Kieran Harrington, the diocese’s spokesman, said that in recent years 75 percent of the parishes in the diocese had gone into debt, sought diocesan subsidies or been forced to dip into reserves, which in most cases consisted of the proceeds of previous sales of church school buildings or other properties.

But beginning next year, he added, the diocese will offer subsidies only in emergencies and will discourage every parish from spending or borrowing against its reserves. “When we looked at the numbers, in some cases we were just shocked by what we saw,” Monsignor Harrington said, referring to the eight-month review process that led to Sunday’s announcement.

Read more, along with reaction from people in the pews, here.

US bishops: go forth and blog
archives most recent
More from Beliefnet and our partners
previous posts