“Christianity survived in the Middle East because of married priests”

That’s the eyebrow-raising comment made by a Melkite Archbishop, interviewed recently by Catholic News Service: 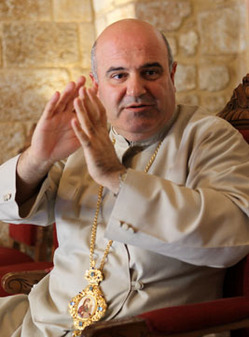 Heading a southern Lebanese diocese that goes from the sea then east two-thirds of the way along the border with Israel, the one problem Melkite Archbishop George Bakhouni of Tyre says he doesn’t have is finding priests.

In fact, the archbishop said, he’s surprised bishops and other leaders of the Latin-rite church aren’t more interested in the Eastern Catholic churches’ experience with ordaining married men.

“Christianity survived in the Middle East because of the married priests,” the bishop said. Because they are married with families and homes, they tend to stay even when conflicts and hardship send many celibate priests fleeing to safety.

The archbishop met Saturday with a small group of Catholic journalists visiting Lebanon with the Catholic Near East Welfare Association, a North American agency supporting Christians in the region.

For the archdiocese’s 10 parishes, “I have 12 priests. Eight of them are married and four are single, but two of the singles are serving in Italy,” the archbishop said.
“We always propose this to the Latin church because you are Catholic and we are Catholic, but we always feel a lot of reticence when we mention this issue to the Roman Catholic Church. I don’t know, but I think it could be helpful to allow a married person to be a priest.”

read next post
George W. Bush: why I'm pro-life
archives most recent
More from Beliefnet and our partners
previous posts