A parish grows in Brooklyn

From the In My Backyard Desk…an inspiring story of evangelization:

What I found while teaching a Called & Gifted workshop in Brooklyn last week is absolutely unique. I’ve worked in hundreds of Catholic parishes in 100 dioceses on 5 continents and I have NEVER met Catholics who is doing what Most Precious Blood parish is attempting. (There is no parish website yet. They’ve been busy building other things.)

Most Precious Blood parish is located at the tip of Brooklyn, next to Coney Island, in an area that has been majority Italian for generations. Over the past 10 years, the Italians have been moving by the thousands and their place has been taken largely by Chinese and Russian immigrants who are not Catholic. Many have no Christian background at all. Like most parishes in the area, Most Precious Blood’s membership had dropped nearly 80% from the its height in the 60’s and the majority who attend are elderly.

Fr. Maduri, who grew up Catholic in the parish next-door, became pastor just over a year ago and responded in a remarkable way. He sized up the situation quickly: either the human community had to be rebuilt or the parish would close. Since the traditional Catholic population was leaving the area, he would focus on making disciples of the unchurched and apostles of the churched.

When the parish school closed, he rented the building out and used the income to renovate the old convent into a faith formation center. He brought in two enthusiastic young evangelists, newly married Andy – with his wife, Megan – and a exuberant young woman named Kree. They work with a Catholic group called Dirty Vagabonds, which specializes in the personal evangelization of urban youth. These recent graduates of the Franciscan University of Steubenville sport lots of conversation-starting tattoos, live very simply in the faith formation building, and spend their afternoons going out and meeting the kids in the neighborhood and the projects nearby. They have resurrected the parish youth group and renovated the rectory basement into an “Underground” gathering space. After only 4 months, attendance is going up steadily – with non-Catholic black and Chinese kids.

Fr. Maduri has also begun an outreach to local Hispanics. He brought in Nancy, a quietly vibrant and efficient woman, whom he had worked with in another parish, to run adult faith formation. He is forming a critical core of the parshioners, sending them to conferences, bringing in speakers to give retreats, putting on Life in the Spirit seminars, and bringing us in to teach his parishioners about gifts discernment.

But Fr. Maduri has even bigger plans. Next year, he will be collaborating with a Catholic Chinese woman to begin reaching out to the huge number of non-Christian Chinese immigrants in the area. When I realized that I was in the midst of a group of life-long Italian Catholics who were planning to learn Chinese (!) in order to evangelize their new neighbors who have no Christian background, I felt like Dorothy in the Wizard of Oz. “I don’t think we’re in Kansas anymore, Toto!” 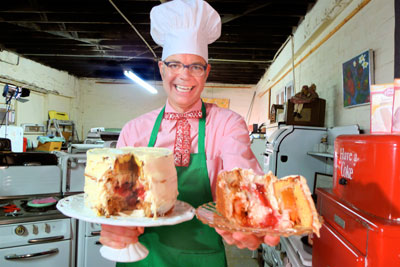 Homily for November 28, 2010: 1st Sunday of Advent
archives most recent
More from Beliefnet and our partners
previous posts