The perfect car for commuting to Spacely Sprockets 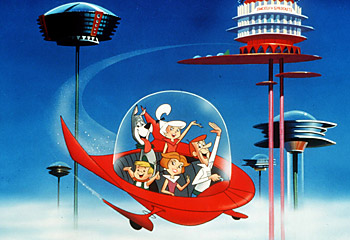 The self-driving automobile is no longer a fantasy. All they have to do now is figure out how to make it fly.

Anyone driving the twists of Highway 1 between San Francisco and Los Angeles recently may have glimpsed a Toyota Prius with a curious funnel-like cylinder on the roof. Harder to notice was that the person at the wheel was not actually driving.

The car is a project of Google, which has been working in secret but in plain view on vehicles that can drive themselves, using artificial-intelligence software that can sense anything near the car and mimic the decisions made by a human driver.

With someone behind the wheel to take control if something goes awry and a technician in the passenger seat to monitor the navigation system, seven test cars have driven 1,000 miles without human intervention and more than 140,000 miles with only occasional human control. One even drove itself down Lombard Street in San Francisco, one of the steepest and curviest streets in the nation. The only accident, engineers said, was when one Google car was rear-ended while stopped at a traffic light.

Autonomous cars are years from mass production, but technologists who have long dreamed of them believe that they can transform society as profoundly as the Internet has.

Robot drivers react faster than humans, have 360-degree perception and do not get distracted, sleepy or intoxicated, the engineers argue. They speak in terms of lives saved and injuries avoided — more than 37,000 people died in car accidents in the United States in 2008. The engineers say the technology could double the capacity of roads by allowing cars to drive more safely while closer together. Because the robot cars would eventually be less likely to crash, they could be built lighter, reducing fuel consumption. But of course, to be truly safer, the cars must be far more reliable than, say, today’s personal computers, which crash on occasion and are frequently infected.