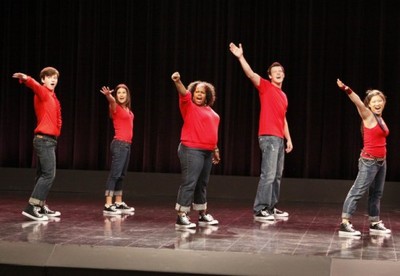 I caught part of last night’s episode of “Glee,” which dealt (rather delicately) with the idea of religion.  The plot swirled around a teenager who discovered the face of Jesus on a grilled cheese sandwich, and another kid, whose father was in critical condition in the hospital.  Life, death, doubt, belief — it was all there, set against the backdrop of songs like “Losing My Religion” and “Papa, Can You Hear Me?”

What really hit me, though, was the final scene, which was strikingly Catholic: the teenager, Finn, finally ate the “Grilled Jesus” sandwich, to the strains of “What If God Was One of Us?”

You’d have to go back to “Mad Men,” and Peggy’s brilliant popsicle ad, to find a more potent Eucharistic message on mainstream television.

Father Alexander Santora happened to catch the pilot of Fox’s “Glee” – and he was hooked.

“It’s ushering in something upbeat and vital even if it’s a little kooky,” says the New Jersey priest. “I even preached about it one Sunday, highlighting the importance of belonging to a group as a way to shape one’s self-esteem and identity.”

I’m beginning to think there is a priest fan base for the show, beyond Fr. Santora. I’ve encountered priests who will chat amiably about “Glee” episodes on Facebook, or drop characters’ names into polite dinner conversation. They seem to be full-fledged “Gleeks.”

Could “Glee” end up being a tool in the New Evangelization?

UPDATE: Others weighing in on the episode include Mike Hayes (pro) and Mary Poust (con), which prompted a respectful followup by Mike the following day. The Catholic League also couldn’t resist issuing a statement on the subject.

UPDATE II: The hysteria has reached ear-splitting proportions.  Comments for this thread are now shut down.