Stephen Colbert: “I love my church” 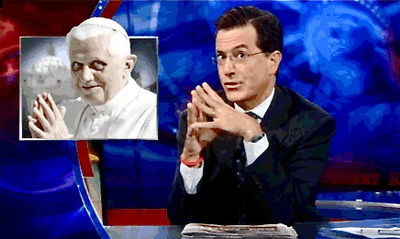 The good people at the Religion News Service have discovered something a lot of us have known for a while: MCPF (My Close Personal Friend) Stephen Colbert is, indeed, a good Catholic boy:

Colbert has said that he attends church, observes Lent and teaches Sunday school. “I love my church, and I’m a Catholic who was raised by intellectuals, who were very devout,” he told Time Out magazine. “I was raised to believe that you could question the church and still be a Catholic.”

His on-air persona is a bloviating holier-than-thou conservative whose orthodox Catholicism is part of what makes him funny. On air, Colbert has chided the pope as an “ecu-menace” for his outreach to other faiths, referred to non-Catholics as “heathens and the excommunicated” and calls those who believe in evolution “monkey men.”

Diane Houdek has tracked Colbert’s on-air references to Catholicism on her blog, Catholic Colbert. When he recites the Nicene Creed or Bible verses from memory, as he did in 2006, it shows how foundational his faith is, she said.

“He is moving in an extremely secular world–it is hard to get a lot more secular than Comedy Central,” Houdek said. “Yet I feel he is able to witness to his faith in a very subtle way, a very quiet way to an audience that has maybe never encountered this before.”

It’s particularly powerful to Catholics, Houdek said, when the lines blur between Colbert’s personal faith and that of his on-air alter ego. She pointed to a 2007 segment in which his character reveled in Pope Benedict XVI’s statement that non-Catholic faiths were “defective.”

“Catholicism is clearly superior,” Colbert crowed beside a picture of the pope. “Don’t believe me? Name one Protestant denomination that can afford a $660 million sexual abuse settlement.”

“He really made a strong criticism of the church.”

Colbert’s personal opinions about Catholicism are not usually so clearly displayed, and his range of guests offers little clues. His Catholic guests have ranged from the theological left–openly gay Catholic writer Andrew Sullivan–to the far right–Catholic League president William Donohue.

Houdek said she regularly fields comments from readers who believe they’ve found a fellow traveler in Colbert. “You can’t pin him down,” Houdek said. “He becomes kind of a Rorschach test for what the viewer’s beliefs are.”

You can read more here. 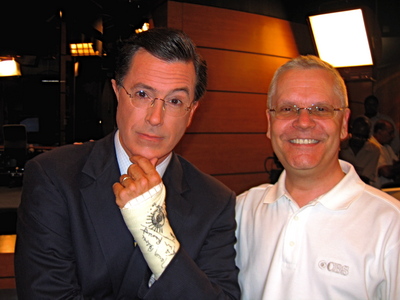