Did you see any kids?

I got an email from a reader and blogger, D. Scott Miller, alerting me to this post of his. He’s involved with youth ministry, and in the course of his blogging, referenced a blog post of my own, about the recent wedding of the former assistant moderator of the altar servers at my parish.  The wedding featured a dozen altar servers of varying sizes and ages, some even in high school.

After mass today. offer a comment. Excluding a “special” youth mass… were kids (elementary, middle, high school) involved in the ministries of liturgy today? How many? Where? and How?

As fate (or the Holy Spirit) would have it, this Sunday featured a mass for the installation of new altar servers! We have 11 new ones joining the ranks, again from various ages, most in third or fourth grade. The kids processed in wearing cassocks and, after the homily, the other servers placed surplices over them. The priest who oversees the group — we have about 100, both male and female — presided, and the pastor offered a special blessing. It was a great moment. 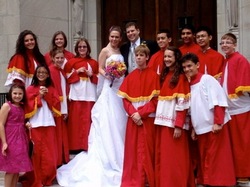 The celebrant echoed something I’ve noted here before:  the remarkable longevity of my parish’s servers. More than a dozen are in high school, and a few even continue into college. It’s a great testament to the thriving Altar Server Society in my parish — and it enhances both the liturgies and the life of the parish. This is where great, active, engaged Catholics come from.  These kids who show up faithfully to serve at the altar every week are undoubtedly more likely to continue serving, in a variety of other ways, as they grow up and have families of their own.

Otherwise, I have to say, sadly, the answer to his initial question is “no.” We had the usual retinue of altar servers involved at all the masses — typically three or four at most masses, with an entourage of more than a dozen at the 11:30 “high” mass — but we didn’t have kids involved otherwise.

What was your experience like? Head over to Scott’s blog and weigh in. I’m curious to see what sort of response he gets (and so is he!)